Off The Beaten Path Things To Do In Curaçao

Living in the shadow of its more famous neighbor, Aruba, Curaçao is located just 40 miles off the coast of Venezuela. Curaçao is a long, arid island that has amazing weather year round. Not only does Curaçao offer gorgeous beaches and turquoise waters, but a rich history and unusual adventures!

While Aruba hosts around 1.5 Million tourists each year, Curaçao sees only 500,000 visitors, making it more off the beaten path. You will still find beautiful resorts and beaches, but there are also tons of other activities to do while visiting this lesser-known Carribean island.

Care to find out what unusual things there are to do on the island??

Then keep on reading! Here is a list of my favorite off the beaten path things to do in Curaçao!

Between Westpunt and Lagun, you will find one of the islands most low-key beaches – Playa Kenepa aka Klein Knip.

Not only is it perfect for sunbathing and snorkeling, BUT you will have the opportunity to cliff jump 20 feet into the bluest waters you’ll ever see. At first, I was skeptical about cliff jumping but I soon discovered that this is one of the safer spots. Even kids were taking the plunge!

TIP: There are areas in the water with large rocks so steer clear. Also, instead of climbing back up the cliffs once you’ve jumped in, I recommend swimming to shore and taking the stairs. While it didn’t seem dangerous, you never know if and when a large wave will crash against the rocks.

Want to know another amazing part about Playa Kenepa?? Hardly any tourists!

This means less fighting the crowds for a spot on the beach and more time enjoying paradise.

TIP: There is only a small snack bar open on weekends so bring your own drinks and food. 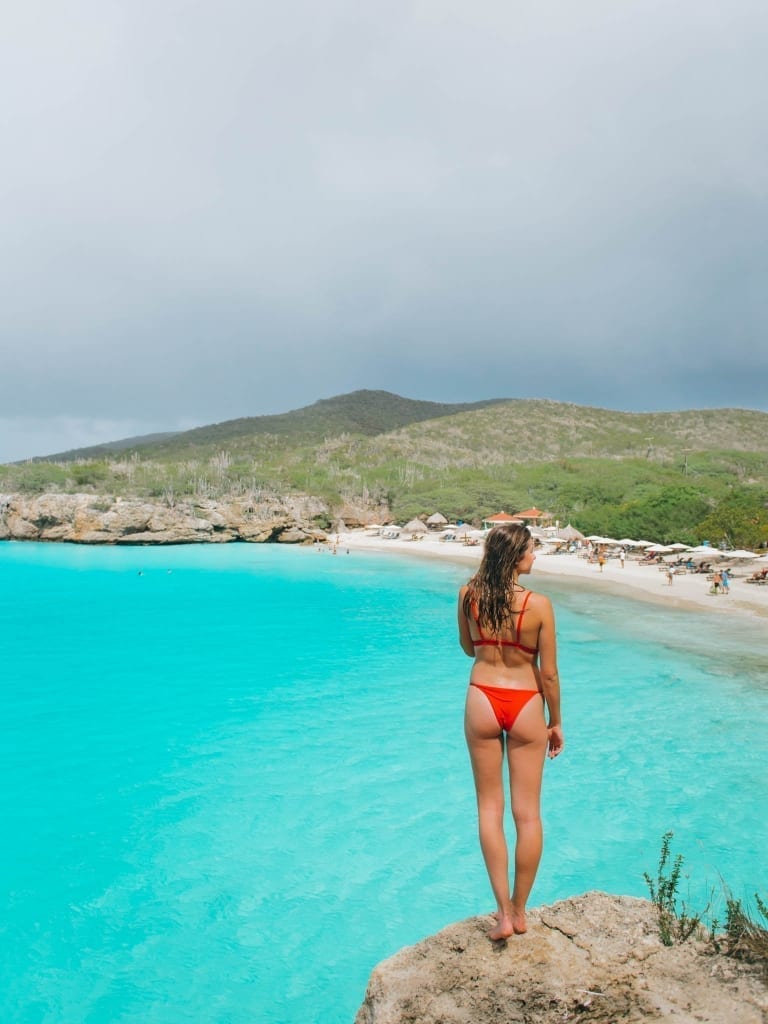 My other favorite beach in Curaçao is Cas Abao Beach.

With its clear turquoise water, fanning palm trees and white sand, Cas Abao will have you canceling your flight home. It truly is paradise!

No surprise, it is a favorite amongst locals and tourist alike, and has even been declared one of the most pristine beaches of Curaçao.

I most enjoyed the fact you could snorkel right off the shore! Just walk about 15 feet into that crystal clear water, put some goggles on, and start swimming. I was immediately surrounded by many different kinds of colorful fish! It was like swimming in an aquarium. I also heard some people nearby say that they had seen a sea turtle off the shore so keep your eyes peeled.

What really helps set apart Cas Abao from other beaches on the island are the facilities.

There’s a bar, restaurant, bathrooms, showers, lockers, dive shop, and massage facility. It has everything you need to enjoy your day at the beach. 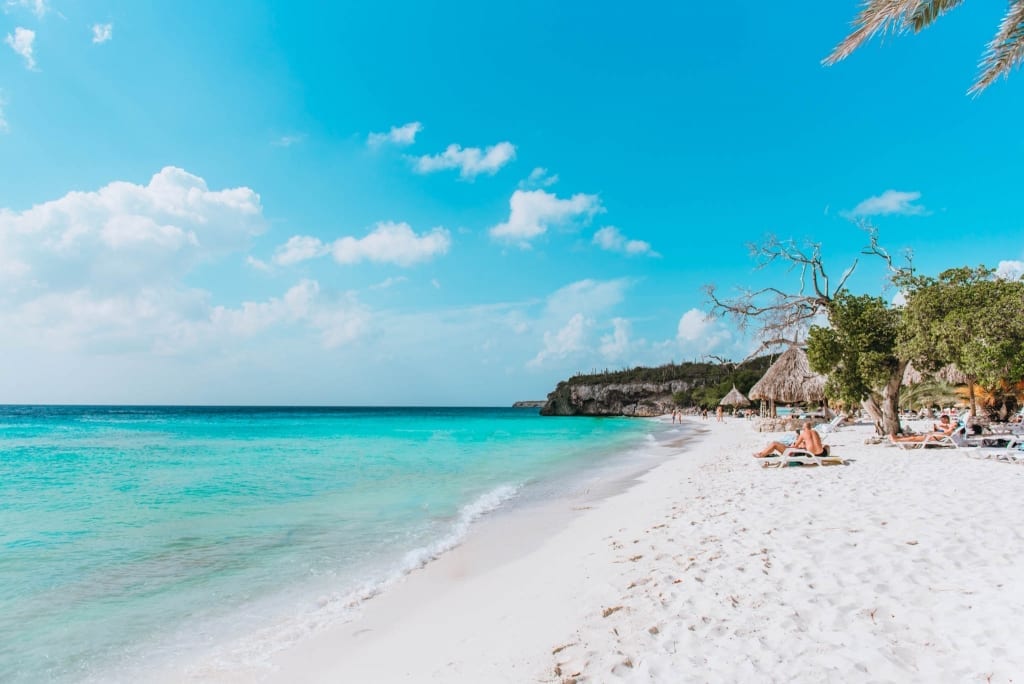 One of the most interesting tours you can do is the safari tour of the Curaçao Ostrich Farm.

Opened in 1995, the farm was initially founded as a means to export ostrich eggs, chicks, and meat to South America. It actually is one of the largest breeding facilities for ostriches outside of African. Soon, the curiosity of the farm grew so they started to make it tourist-friendly by offering tours, dining, and souvenir shopping.

I went on the Ostrich Safari Tour that takes you around the farm in a safari vehicle to learn about the African Ostrich and the Emu. Here I encountered all stages in the life of the ostrich.

Did you know that ostriches are unintelligent? In fact, their memory only lasts about 8 minutes, then it is completely reset! It honestly is a wonder how they are not extinct!

My favorite part of the tour was at the end when we had the opportunity to feed and ride an ostrich!!! While most people opted out of riding the ostrich, I figured this might be my only chance, so I did it!

This was way harder than riding a horse! You really have to hang on tight our you’ll fall right off!! Lucky for me, two of the guides jogged next to me and held onto the ostrich to make things more stable.

It definitely was one of the most bizarre and fun things I’ve done! 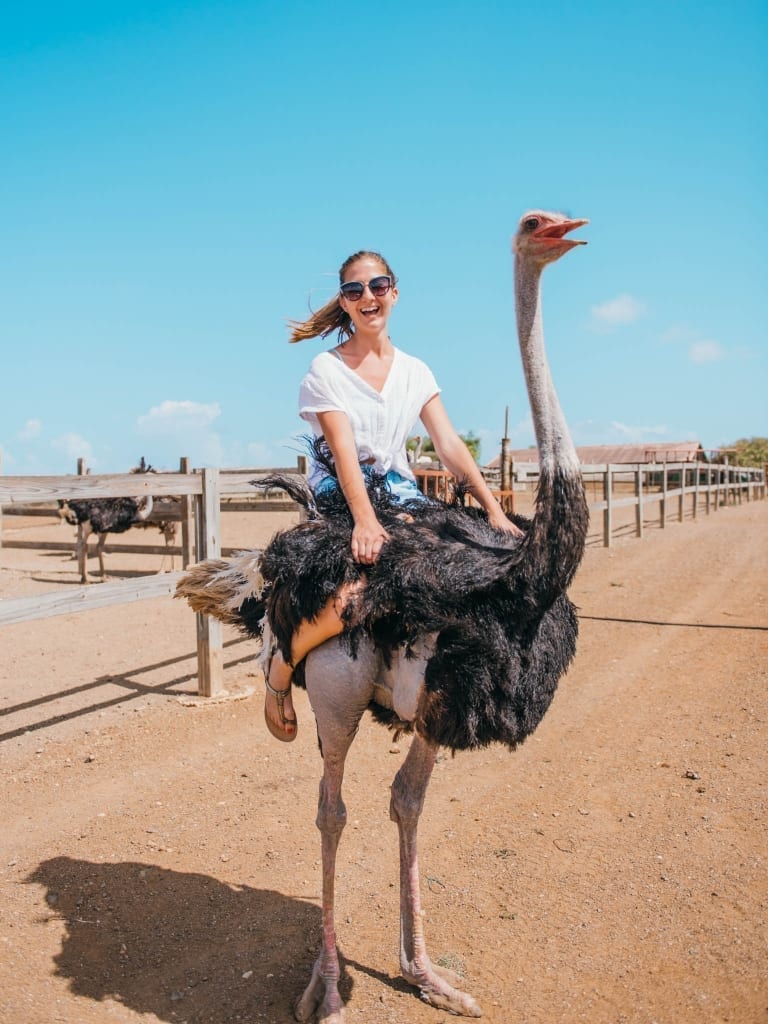 For all those concerned with the ethics of ostrich riding:

I was concerned about this as well and I’m sure there will be some people who are for or against. Here are the biggest concerns: “Like all wild animals, ostriches avoid human contact in the wild, and they can be seriously injured when forced to carry human beings,” according to PETA Director Mimi Bekhechi.

First, I’ll address the point that they avoid human contact in the wild. That is entirely true. However, these ostriches on the farm are not wild and are used to human interaction. For example, the one I rode was bred in captivity and is 15 years old. I definitely wouldn’t suggest a random person who is unfamiliar with ostriches to handle and ride an ostrich, but I trust those who have worked with the same ostrich for years to understand their behavior.

As to the second point about ostriches being hurt when they carry humans, the wild ones are a lot leaner and smaller so riding one from the wild would be cruel as they could not support human weight. That being said, the ones bred on farms are a lot larger. The power in these bird’s legs is immense, and the structure is perfectly capable of carrying 150 lbs and I weigh 119lbs. The farm is strict on weight AND they rotate for riding so it doesn’t tire or hurt the ostrich.

I also want to point out that these ostriches are not trained to carry humans by being tortured like elephants. The farm picks ostriches for riding based on age and personality. I think everyone will have their own opinion and I think both sides have some truth. So it’s really just up to everyone to decide for themselves what is ethical and what is not.

Uncover The History Of Fort Beekenburg

Fort Beekenburg, east of Willemstad, lies on a rocky cliff over Caracas Bay. Built in 1703 under the orders of Governor Van Beek (must be where the fort gets its name), the fort was used to ward off pirates as well as the French and English fleets during the 18th century!

Today the fort is in great condition, not well known to tourist, and free to explore!

When you enter the fort, you’ll see some original canons still in place against the walls as if they’re ready to fire. Just imagine you’re the one in charge of defending the island from pirates!!

TIP: For a gorgeous 360-degree view of the island, climb to the top of the round tower! 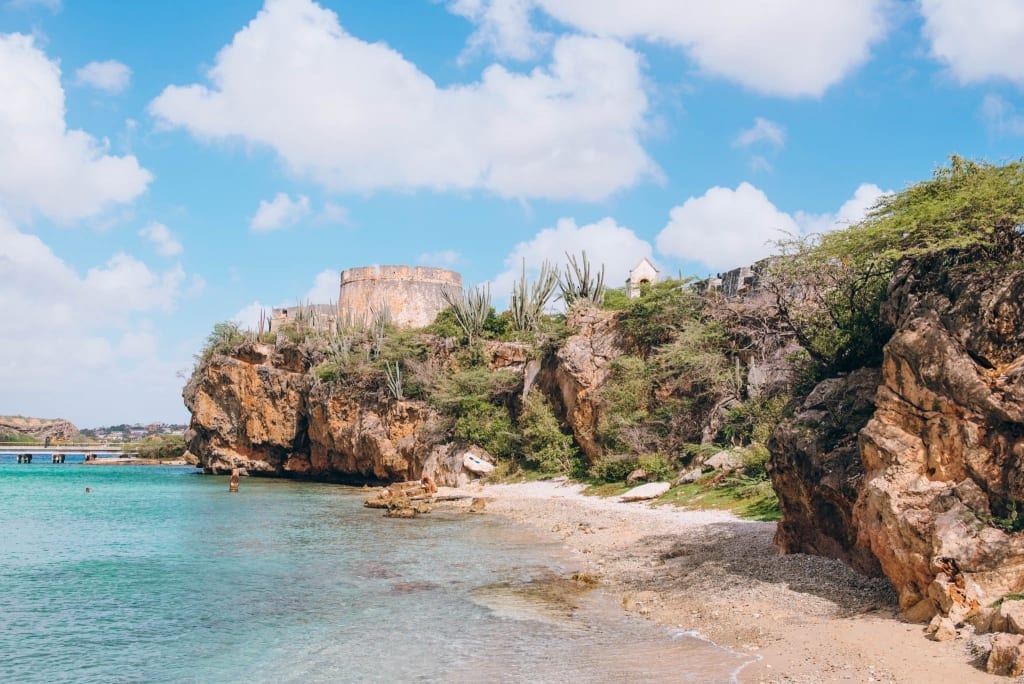 Learn All About Aloe At The Plantation

Just a short distance from the Curaçao Ostrich Farm is CurAloe Plantation.

On these 10 acres, there are more than 100,000 aloe plants, a factory, and a CurAloe store. Anywhere between the hours of 9:00am – 4:30pm every day you can wander between the aloe fields, watch a video of the production process, and learn all about the plantation and products from the shop attendants. As a bonus, it’s all free!

I previously knew aloe was really great for skin since I often get sunburnt and find solace in my blue aloe vera cream. However, I was stunned to learn about the other health benefits!

Did you know that you drinking specific kinds of aloe juice can help with cardio, digestive, diabetic, and immune problems?? Don’t believe me? Check out the different kinds of juices offered by CurAloe: https://www.curaloe.com/health-line/.

It’s really so amazing what the aloe plant can do. 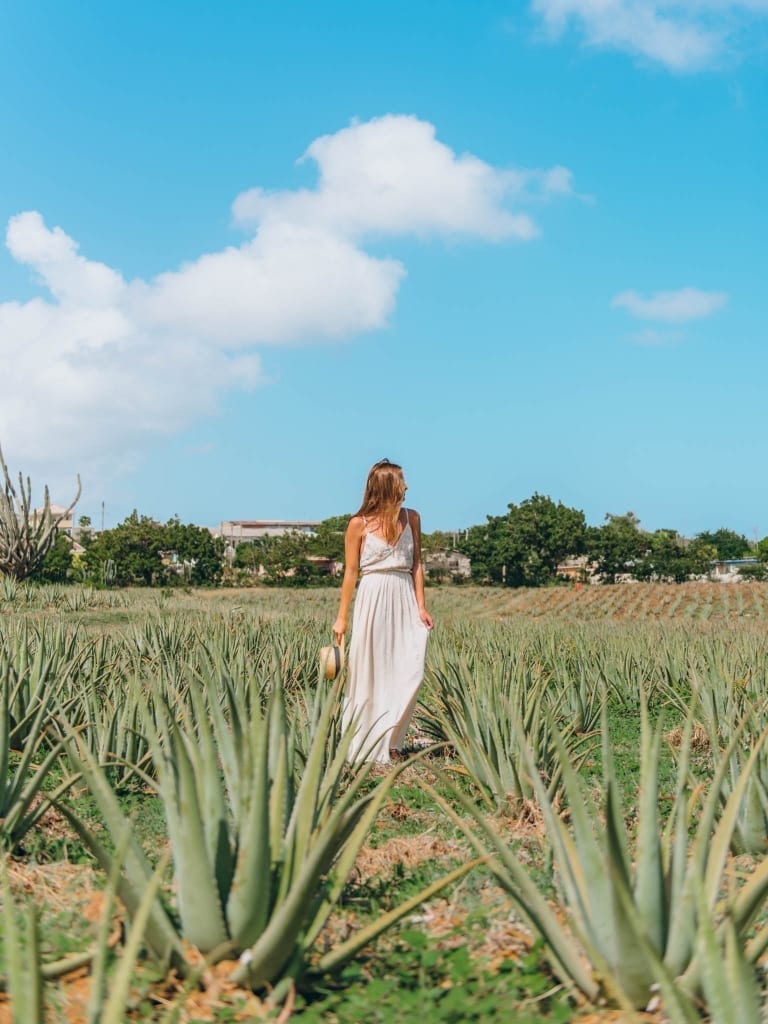 If you enjoy seeing the raw power of nature, you need to see the underground cave Boka Tabla at Shete Boka National Park.

When you enter the park, you’ll walk a hundred feet or so towards the sea. Soon, you’ll begin to hear the waves crashing against the rocky shore and it only get’s louder and louder. Once you reach the wooden platform, you’ll see a small crevice to your left. Go inside and start climbing down. BE CAREFUL. The rocks are slippery and the cave has low ceilings.

Inside the dark underground cavern of Boka Tabla, you’ll see the huge waves coming in from the mouth of the cave and hear them as they crash into the walls.  The sound at times can be very intimidating but it’s such a surreal experience.

Once you’ve watched the surf roll in a couple of times, you can head back the way you came and walk along the limestone cliffs for a gorgeous view of the jagged, dangerous looking north coast. 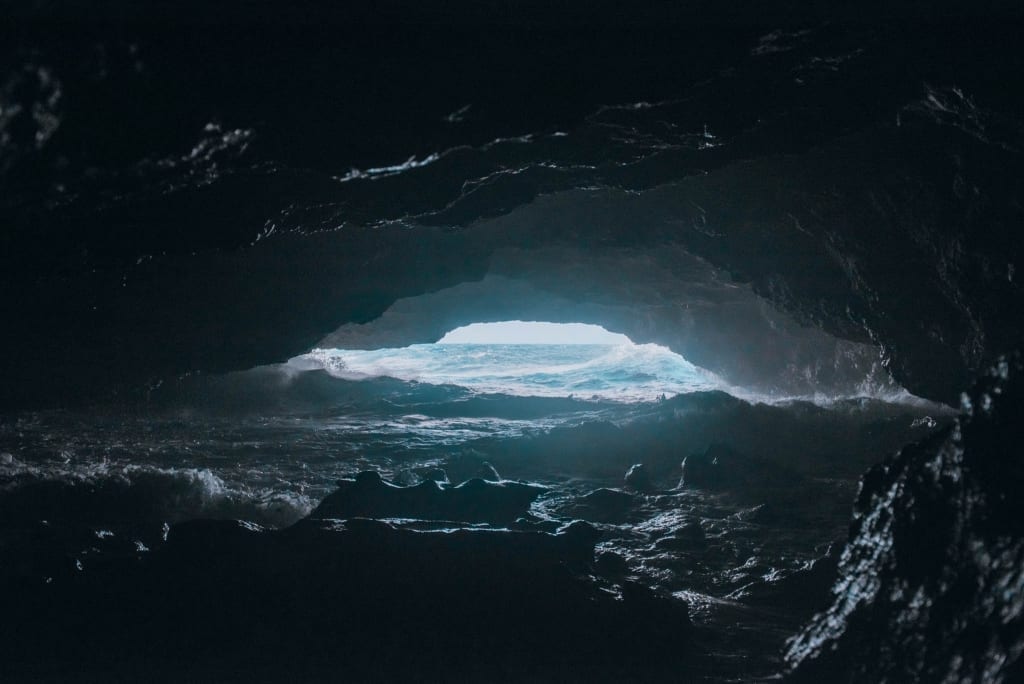 One of the reasons why I love Instagram is that people can share amazing locations, well known or hidden gems alike. Funny enough, I actually came across the Santa Martha Lookout from an Instagram photo. Once I saw it, I knew I had to go there!

It did not disappoint!

I have to say that this lookout was the most beautiful view I saw on the island. There was just something so special about the mountains on the horizon, the colors of the landscape, and the way the bay is shaped. I could have stared at this scene for hours and been completely content.

Directions: There isn’t an exact address to get here but I’ll try my best to give directions. You’ll plug in this address, Kaminda Johan M. Statius van Eps, Soto, Curaçao, but keep going along the windy road. You’ll drive for about half a mile as you drive up a hill, then you’ll see this view on your right side. Just hop out of your car and there it is! 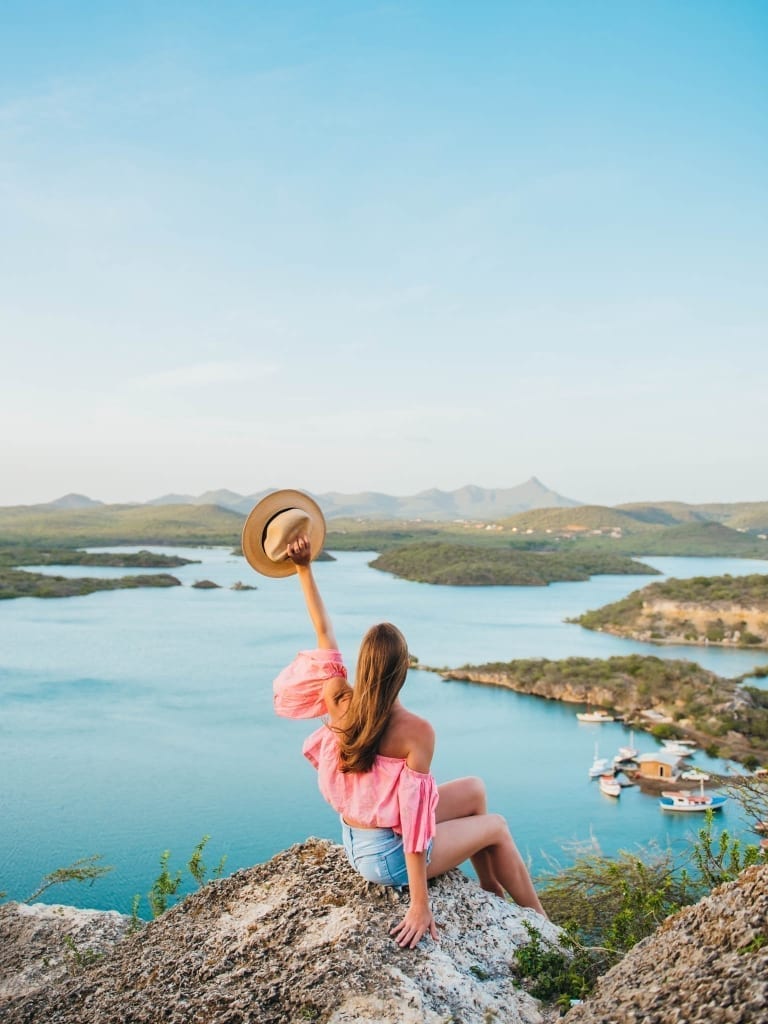 Welcome, to one of the most deserted beaches on the island and enjoy the sunset while swimming in a natural tide pool.

Directions: Keep driving along that same road you came for .25 miles. You’ll pass some private villas and then an abandoned hotel. Drive down towards the beach and park your car wherever! 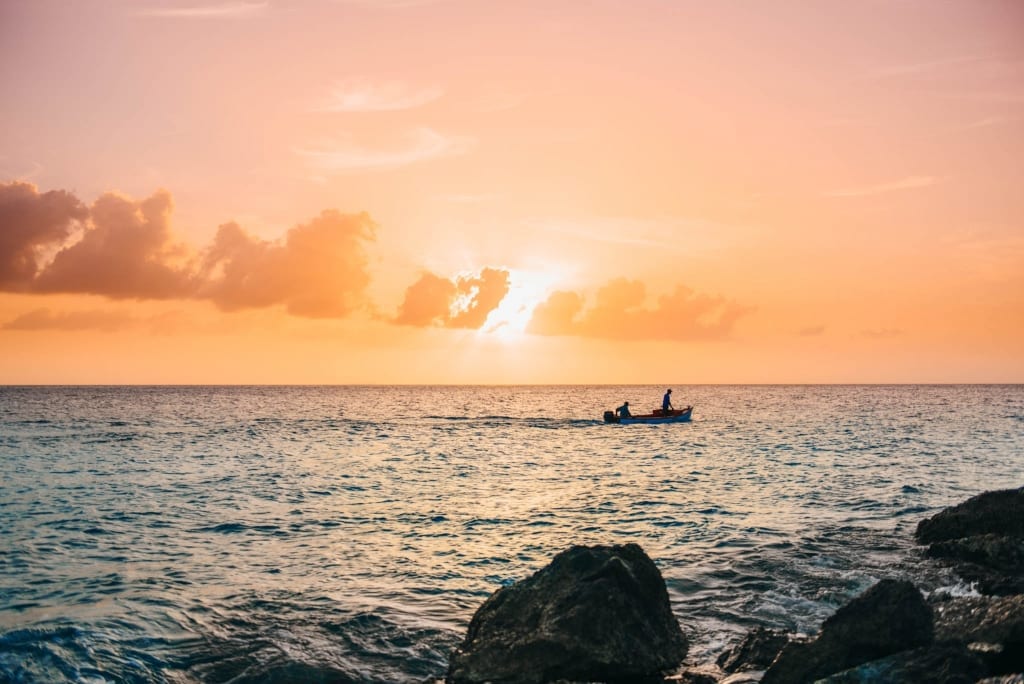 This post is written in partnership with Marriott Hotels and Renaissance Curacao Resort & Casino. As always, my thoughts and opinions are my own. Thank you so much to everyone who made this trip possible, and to the wonderful staff at Renaissance Curacao for making me feel at home. Also, a special thanks to our guide “Papi” from Scooby Tours and Reggie for showing us your island! This trip was definitely one to remember.

TO SEE MORE OF MY ADVENTURES IN CURAÇAO, CHECK OUT THIS VIDEO: