Visiting Texas Tulips: Everything You Need To Know

Springtime in Dallas, Texas – the sun is shining, birds are chirping, and flowers are blooming. While bluebonnets are the most popular flowers to blossom this time of year, Texans will soon know all about the beautiful tulip farm in Pilot Point, Texas.

Texas Tulips is a family owned and operated business that supplies tulips and bulb planting services. However, from February through April, they open their farm to the public and allow visitors to enjoy the tulip fields in bloom. Additionally, you have the option to hand-pick tulips and bring them back home!

I stopped by Texas Tulips at the end of March and can say it is my favorite Springtime activity in the DFW area. I encourage you to check it out! But before you go, here is some information about the farm and a few things I’ve learned from my first visit.

The History of the Tulip Farm

The story of Texas Tulips begins over forty years ago in Holland or the Netherlands. Piet and Alfra Koeman had a horticultural farm with several greenhouses that included onions, leeks, chrysanthemums, irises, and tulips. Over the years, they became experts in tulips and were well known for producing ‘early’ tulips, which allowed customers to enjoy these beautiful flowers as early as December.

When Piet passed away in 2011, his son, Pieter, decided to chase his dreams of living in the United States. After some research, he discovered a place that would allow him to continue his family’s business and make the perfect home for his family: Pilot Point, Texas. This charming countryside town had fertile soil and beautiful weather during the Spring – two necessary ingredients for growing tulips.

So in 2015, the Koeman family moved from the Netherlands to Pilot Point and opened Texas Tulips.

The farm has now been operating for more than four years and continues to draw in new visitors each season. People from all over the South come to experience a piece of the Netherlands right here in Texas. 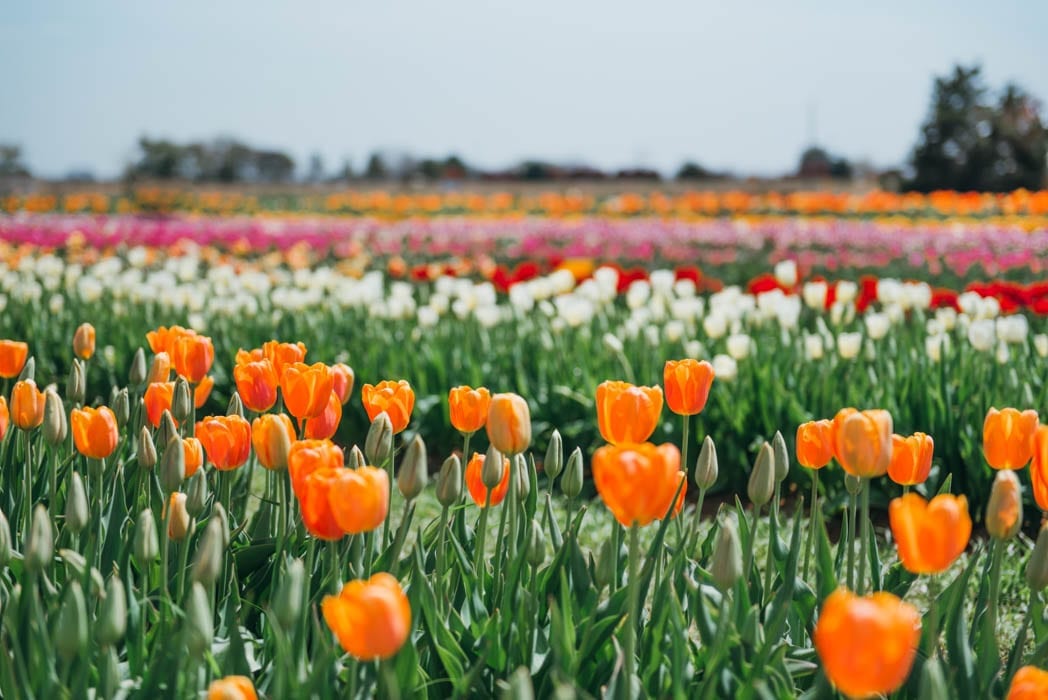 When Does Their Tulip Season Start?

Texas Tulips allows people to visit whenever the tulips are in bloom, which varies every year. Generally, the season is between late February and early April. Please check their website to make sure they are open before you go: https://texas-tulips.com.

How Much Is The Entry Fee?

You can visit these colorful tulips fields for only $5.00 per person! Such a great deal considering you can spend as much time as you want here. The last time I visited, I stayed for four hours.

Where Can I Park?

There is a dirt parking lot right in front of the entrance. As a bonus, parking is free!

What Facilities Are On The Property?

Concessions are available in case you need a snack and quick refreshment. There are also picnic tables and restrooms (porta potties).

Can You Pick The Tulips?

Absolutely! That’s the main thing I love about Texas Tulips. On top of being able to enjoy the tulips, you can pick some and bring them home with you for the price of $2.50 per stem. Once you’re ready to go, head to a booth and they will put the stems in gel and wrap your tulips in colorful paper. Oh, they also provide baskets for you to place the picked tulips in while you wander around the fields.

Are Photos Allowed At Texas Tulips?

This is 100% okay! In fact, taking photos and sharing them with your friends and family are encouraged. However, if you want professional photos taken at Texas Tulips, you must pay a $ 25-day pass at the entrance. When I say professional photos, I mean you hired a photographer to capture your family, senior, or wedding photos. If you want to take pictures just for fun, there is no need to pay this photography fee. 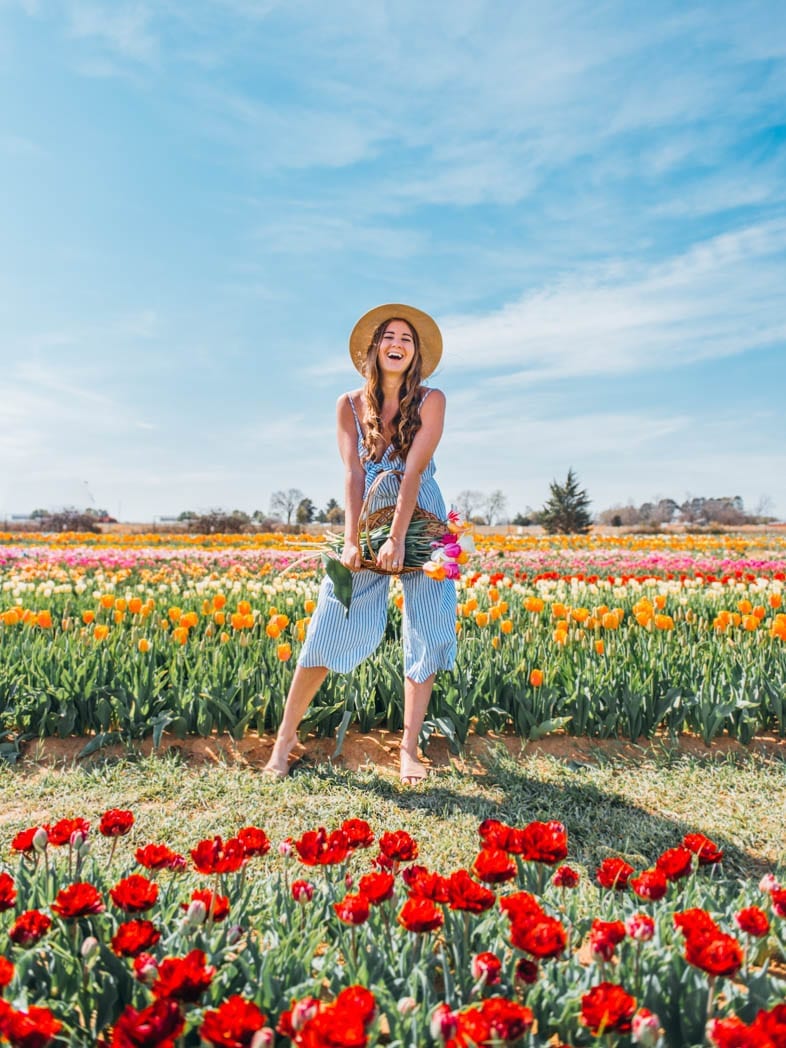 When Is The Best Time To Visit?

Once Texas Tulips opens for the season, there isn’t a wrong time to visit. To guarantee blooms late in the season, the Koeman family specifically plants late blooming tulips. So if you go at the beginning or end of the season, you’ll still see some gorgeous flowers.

If you want to skip the crowds, I recommend visiting on a weekday and right when they open at 10:00 am.

What Should I Bring?

If you go on a sunny day, I recommend sunblock, a hat, and a water bottle. Because Pilot Point is windy, many people feel cool and forget about the effects of the sun. After four hours of wandering around the fields (with no shade) I had a sunburn. Luckily I brought a hat to cover my face, but my shoulders were fried. Put on sunblock before you go and carry a water bottle to keep yourself hydrated. 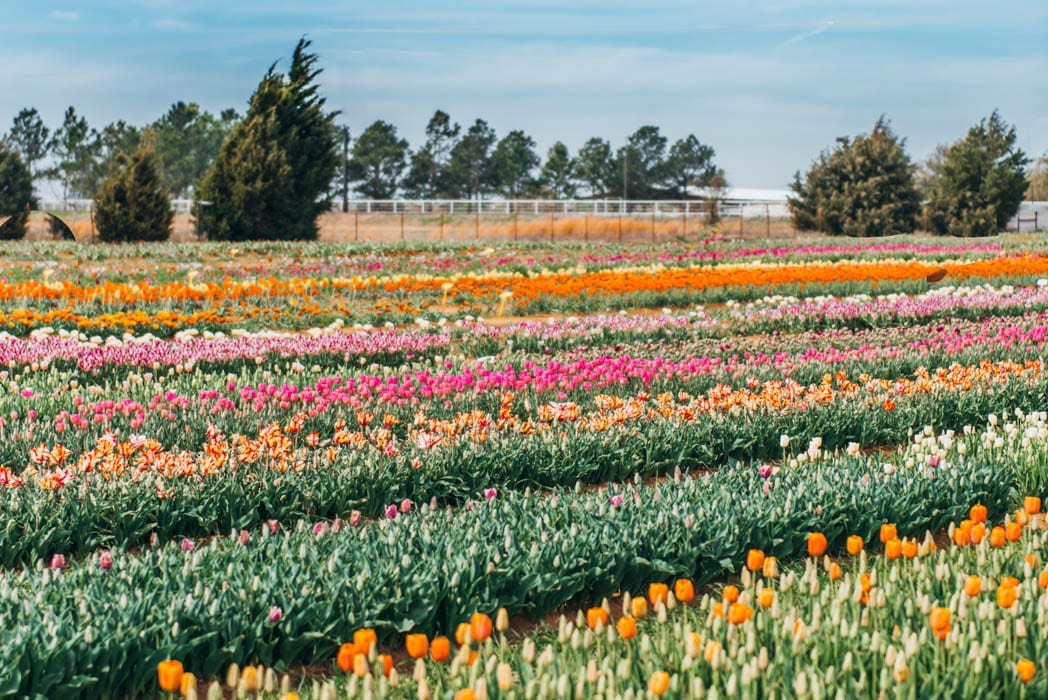 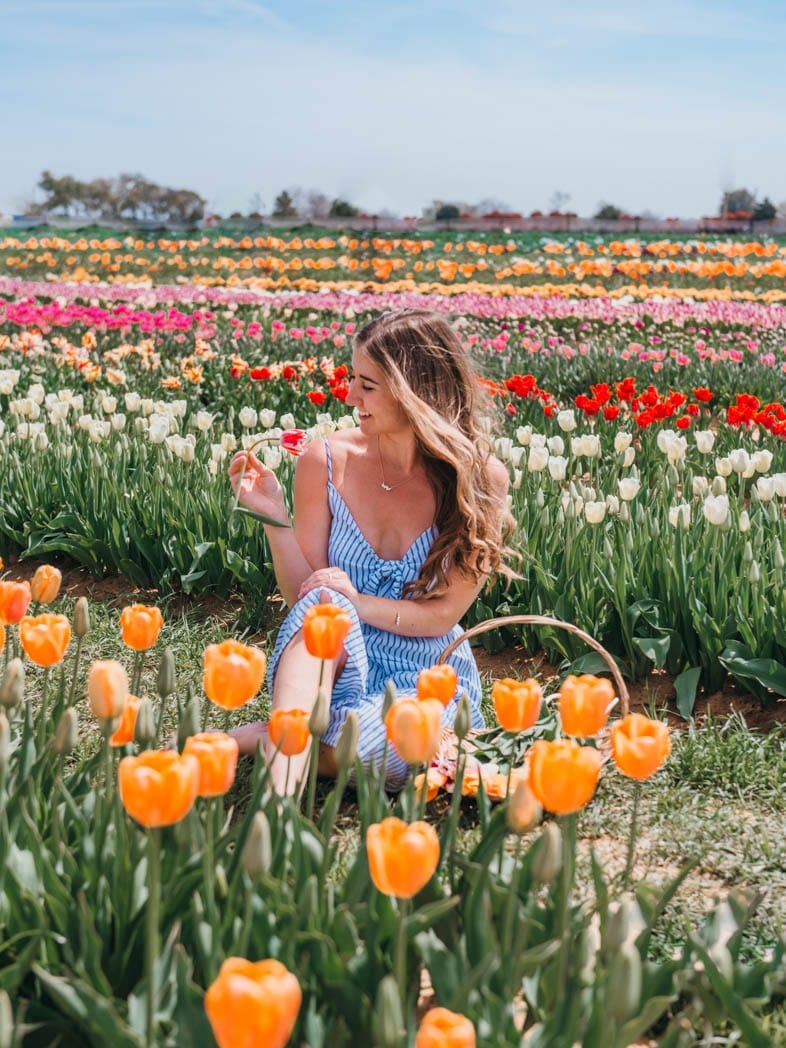 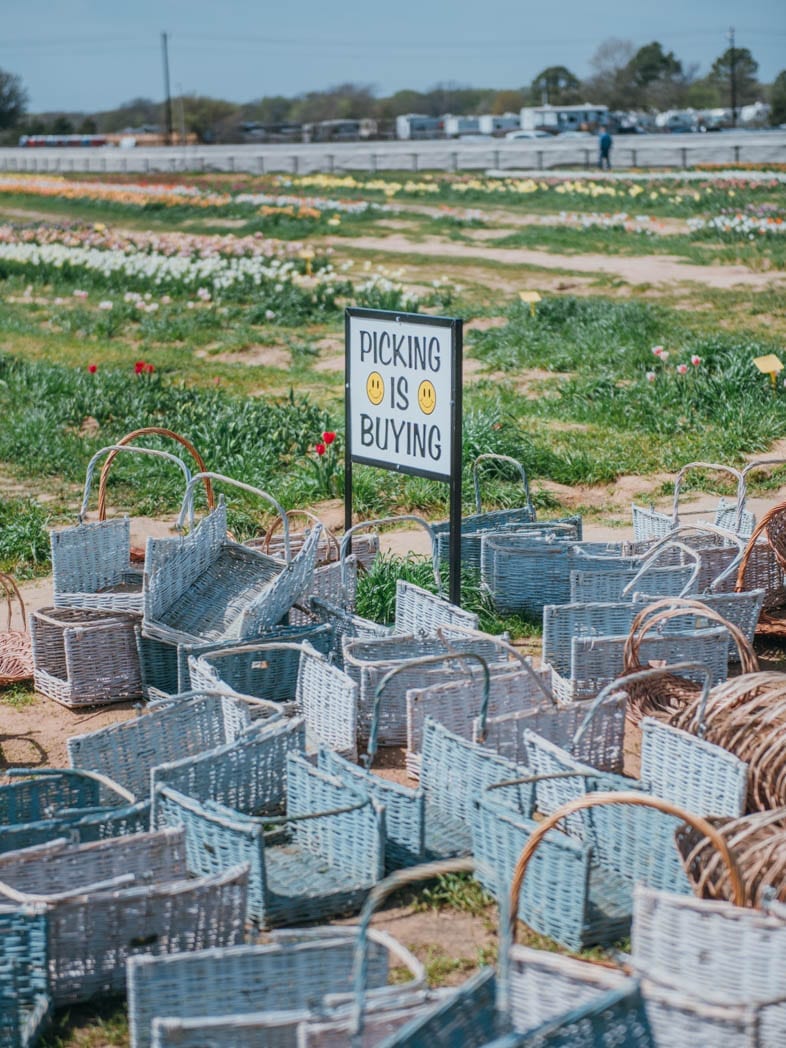 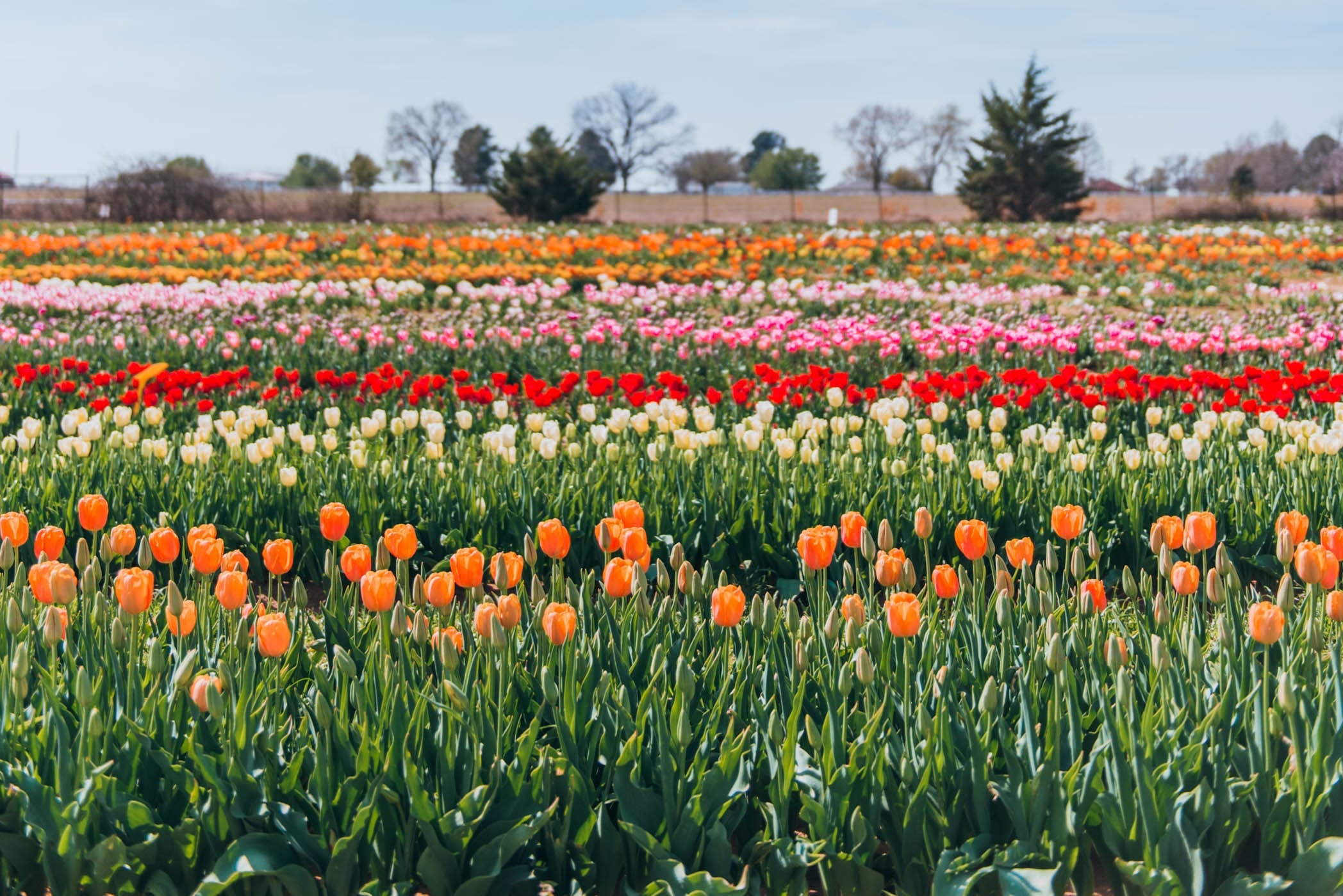 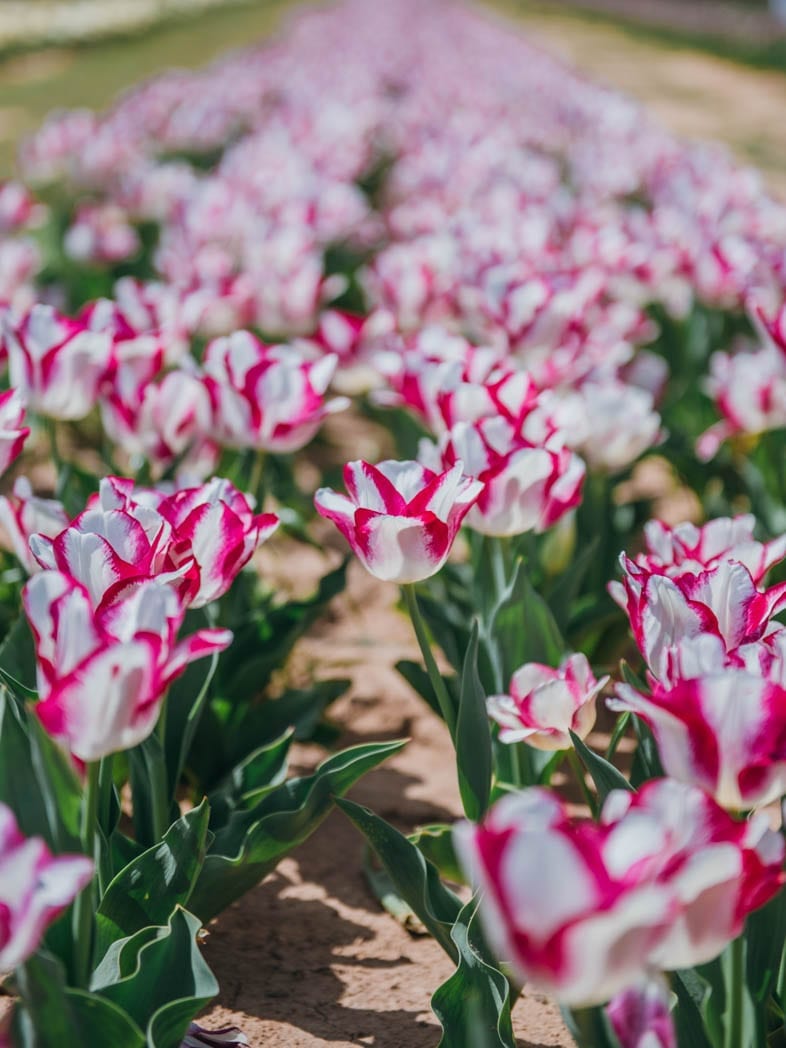 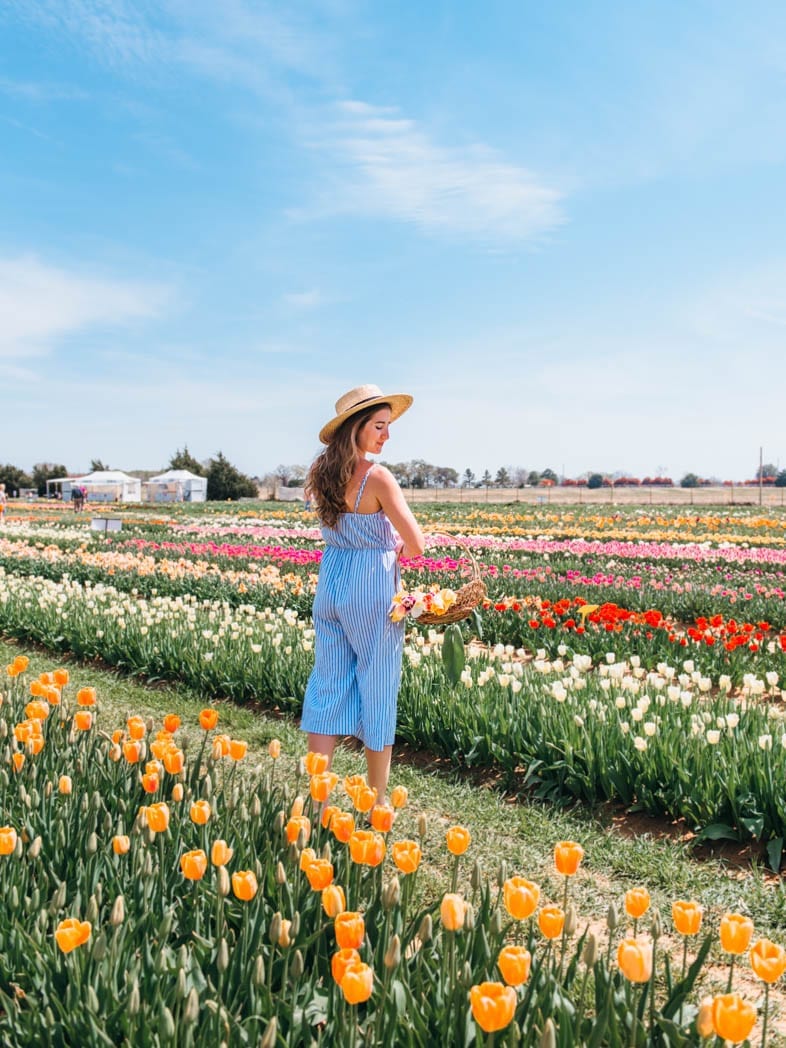