What To See In Medieval Rhodes | Old Town Walking Tour

As a gateway between Europe and the Holy Land, Rhodes was a hotbed of activity during the Medieval Crusades. At one point, for nearly 200 years, Rhodes was a sovereign state under the rule of the Knights of the Order of St John (also known as The Hospitallers). The small island of Rhodes was a key Christian stronghold for merchants and crusaders alike, bringing many riches and skills to the area. In fact, both Richard the Lionheart (1189) and Philip II of France (1192) stopped at Rhodes on their way to and from the Holy Land.

Fast forward to today and you can see why it’s easy to fall in love with the history of Rhodes. The buildings erected by the Knights still dominate the city. The Old Town feels like walking back in time because the majority of the Medieval Town of Rhodes is pure pedestrian traffic only (no motorized vehicles allowed).

Layton and I explored the Medieval Town of Rhodes for a day. We started early but walking along the cobblestone streets, looking up at medieval castles, and exploring the old living quarters of knights long gone made for a fantastic day exploring the UNESCO World Heritage Centre.

In the map below, I’ve marked the key places we explored to make things a little easier for you when planning your next trip to Rhodes.

Out first stop of the day was The Red Door Gate. Being a city surrounded by walls, there are A LOT of gates. Each gate brings about a unique charm as you walk in and out of the security the wall brings.

As you walk outside the city wall, you can’t miss the massive dry moat surrounding the city. Imagine it being full of water and you can quickly see why the fortress of Rhodes was hard to attack. Now, the dry moat bed serves as walking and running paths for locals and tourists alike. 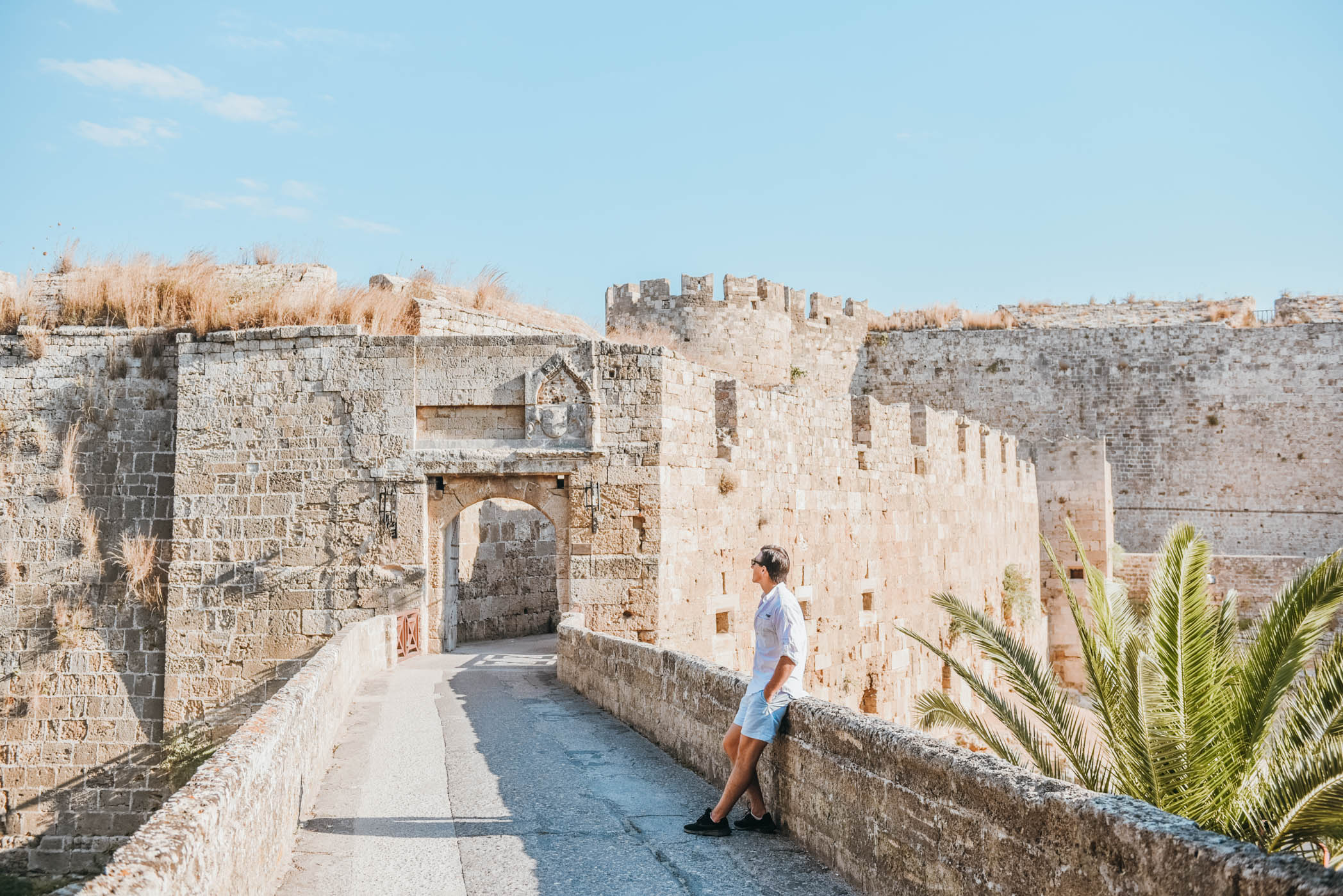 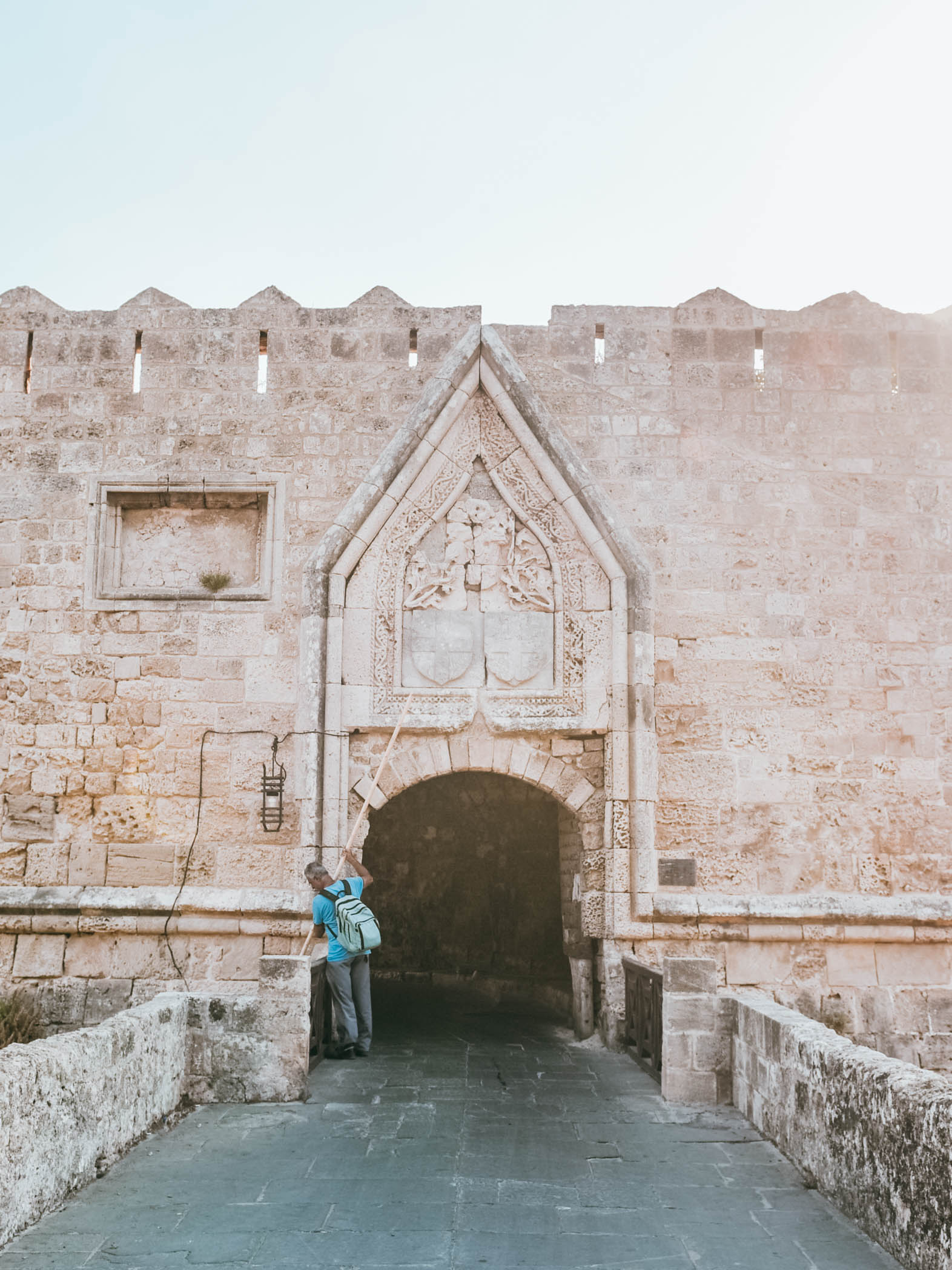 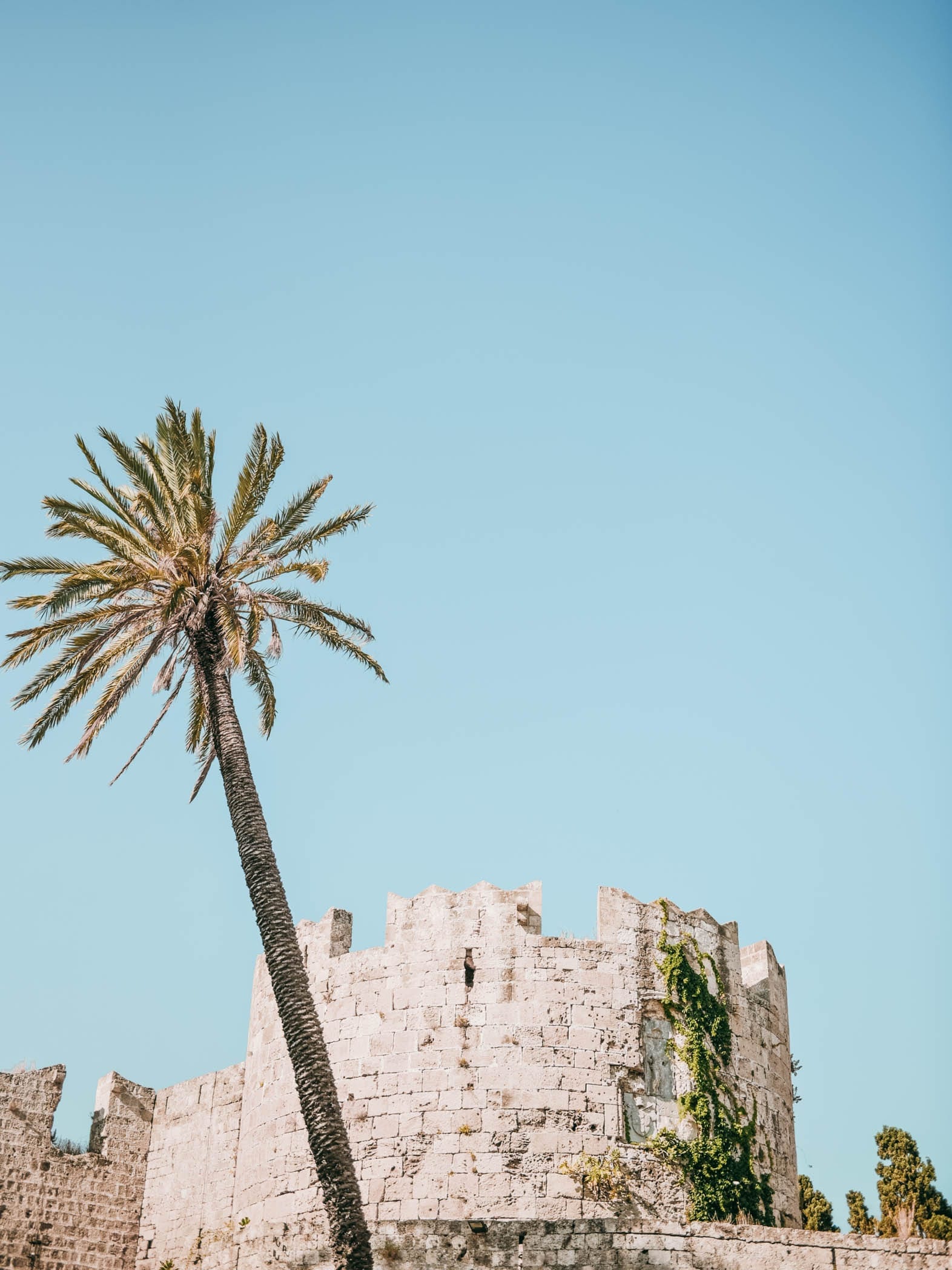 Street of the Knights

This medieval street is lined with medieval “inns” built for the knights crusading with the Order of the Knights of St John. The Order was organized into seven “tongues”, each having its own seat, or “inn”. The inns of the tongues of Italy, France, Spain, and Provence lined the famous Street of the Knights on both sides -one of the finest testimonies to Gothic urbanism in the modern world. In order to protect the city, the seven tongues each were responsible for guarding a specific area of the wall, which they did successfully for more than 200 years.

Walking along this street, you can’t help but think back to the armor-clad knights walking right where you did just a few hundred years ago. If you are lucky, some of the old “inns” will be open. Today, they serve a variety of purposes (from art studios to government offices). We were lucky the old France Inn was now an art studio that allowed tourists to visit for free. The insides of these buildings are just as remarkable and unforgettable as the outsides.

Tip: If you’re looking for this street on a map, it is called Ippoton. 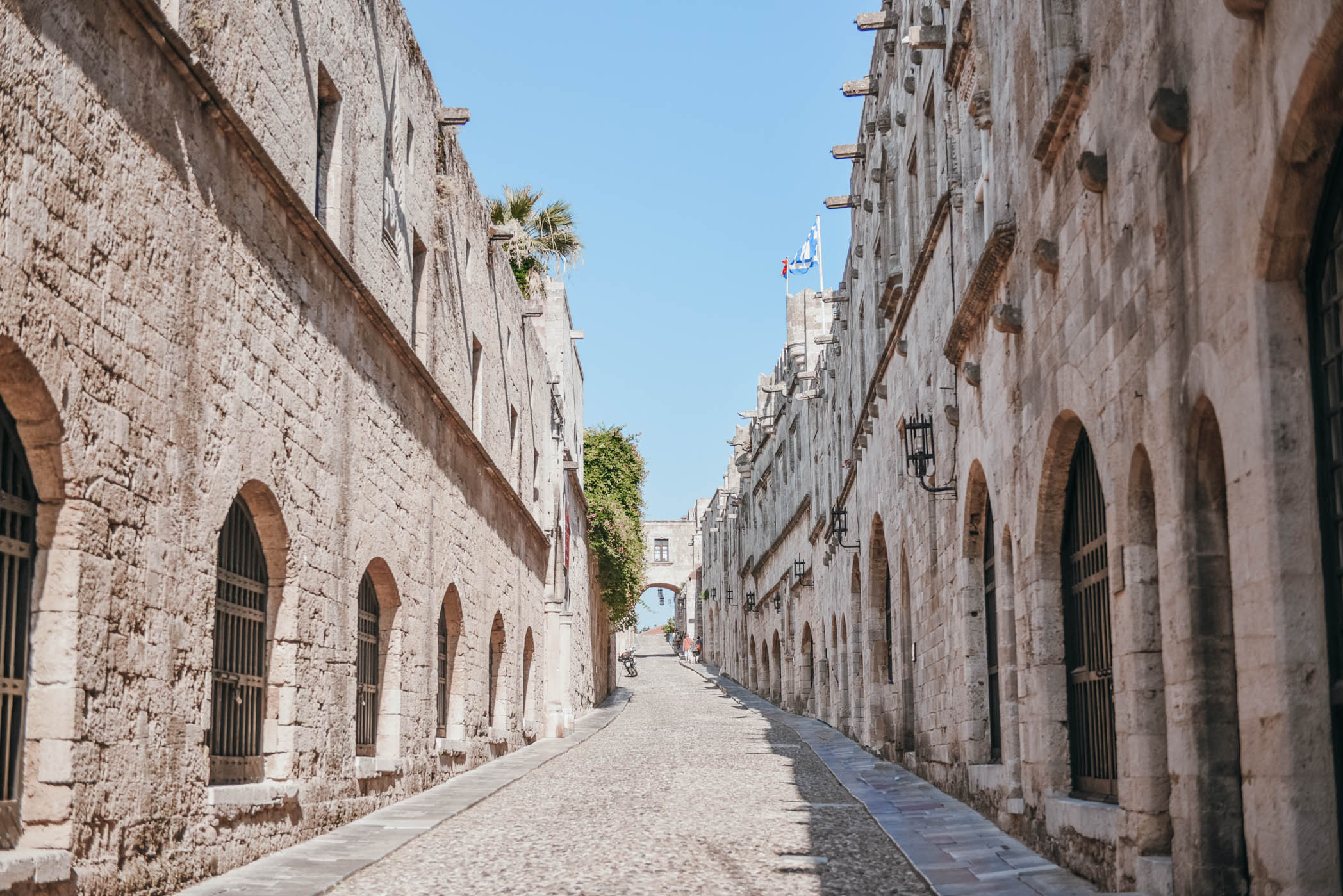 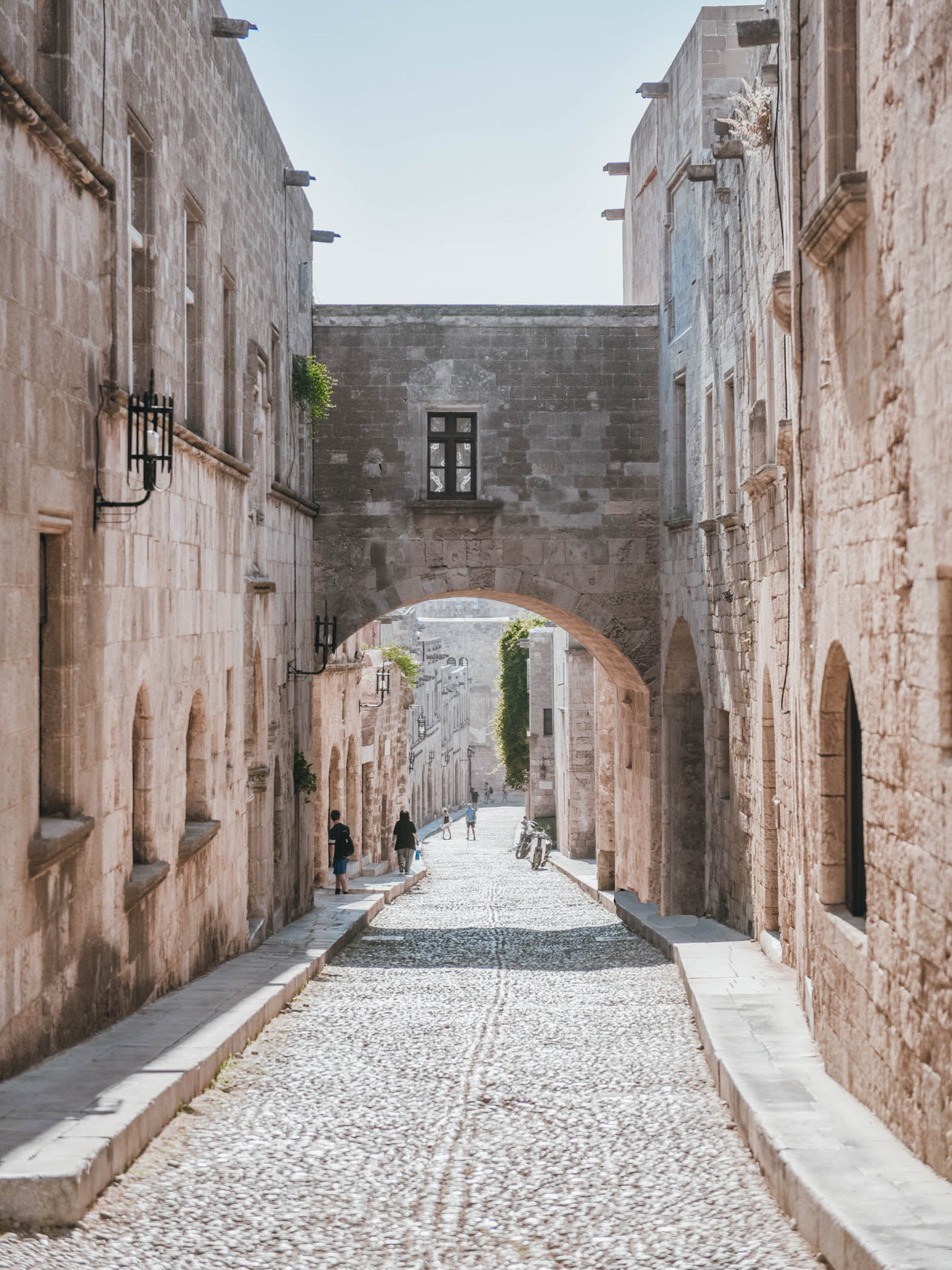 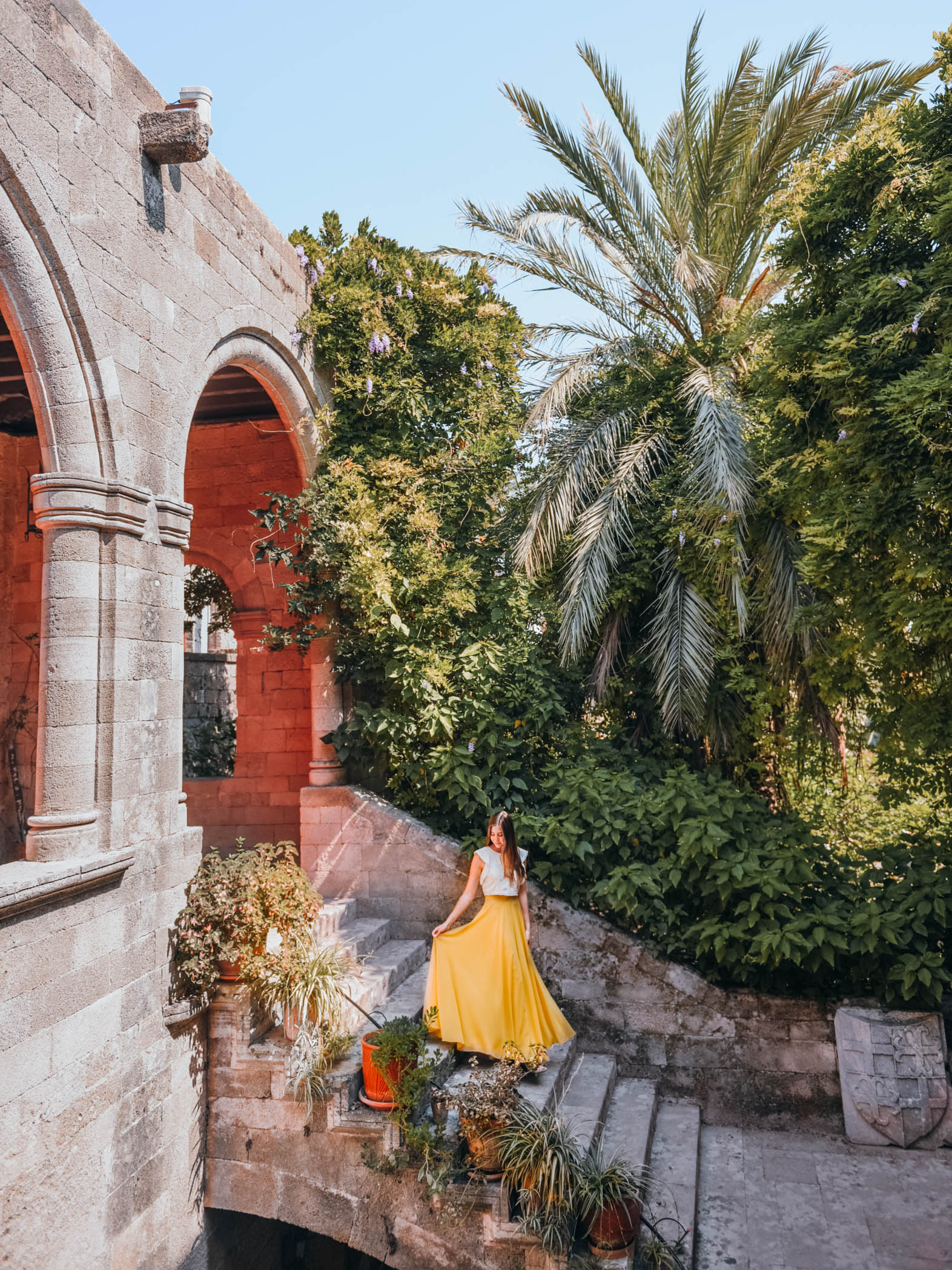 Palace of the Grand Master of the Knights of Rhodes

Probably one of the coolest architectural structures we visited during our Meditteranean trip was the Palace of the Grand Master of the Knights of Rhodes.

According to a recent study, it was built on the foundations of an ancient temple to the Sun-god ‘Helios’ and probably that was the spot where the Colossus of Rhodes stood in back in the Antiquity time period. The castle itself was originally a Byzantine fortress which later housed the administrative center of the Order of Knights. It is one of the few examples of Gothic architecture in Greece. From the high towers, you can see miles into the sea and the surrounding countryside, making it an excellent headquarters for a group of crusading knights.

Nowadays the ground floor holds two large exhibits about the city of Rhodes. It doesn’t cost much to do a tour of both the large exhibits on the ground floor and the insides of the castle itself. I highly suggest it. Not only will you get an even more in-depth history lesson on Rhodes from the exhibits, but the insides of the castle are not to be missed. You can explore on your own or with a tour group. Either way, don’t miss the amazing floor mosaics, large rooms full of knight “lockers”, and halls including the large hall of the Council, the Knights dining hall, and private chambers on the upper floor.

Tickets: €6 or you may purchase a special ticket package for €10 which includes entrance to the following: Grand Masters’ Palace, Archaeological Museum, the church of Our Lady of the Castle and the Decorative Arts Museum. 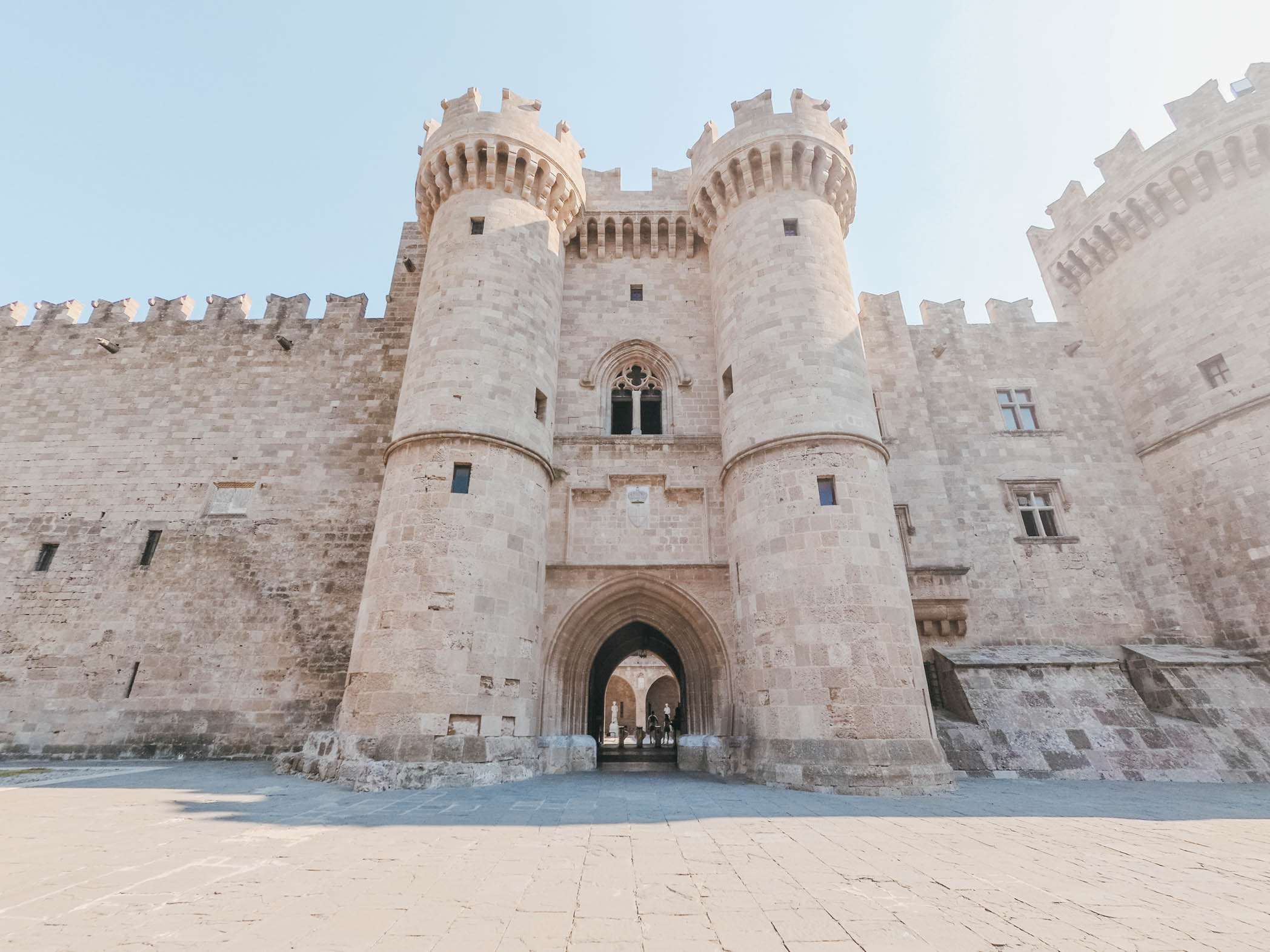 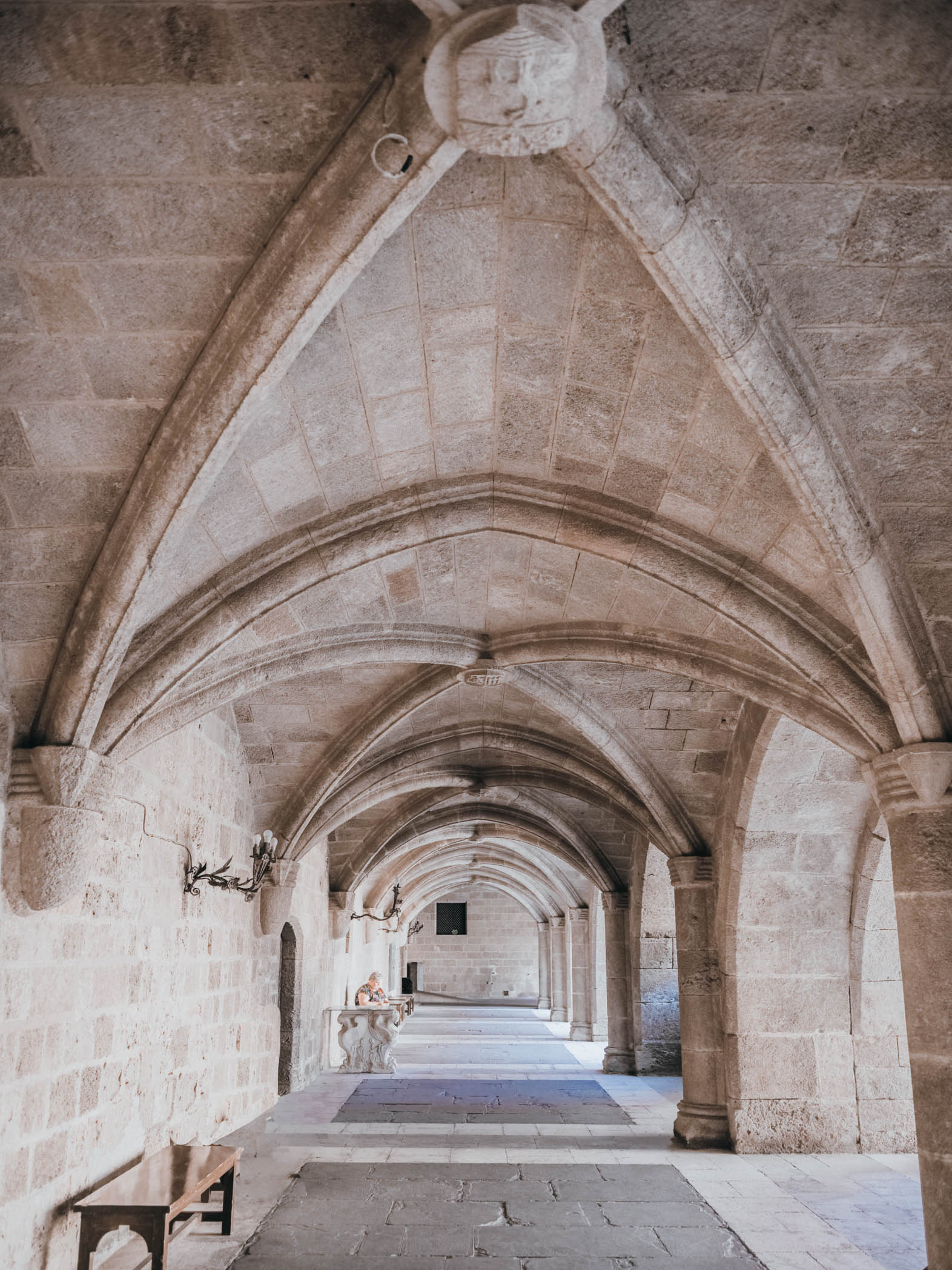 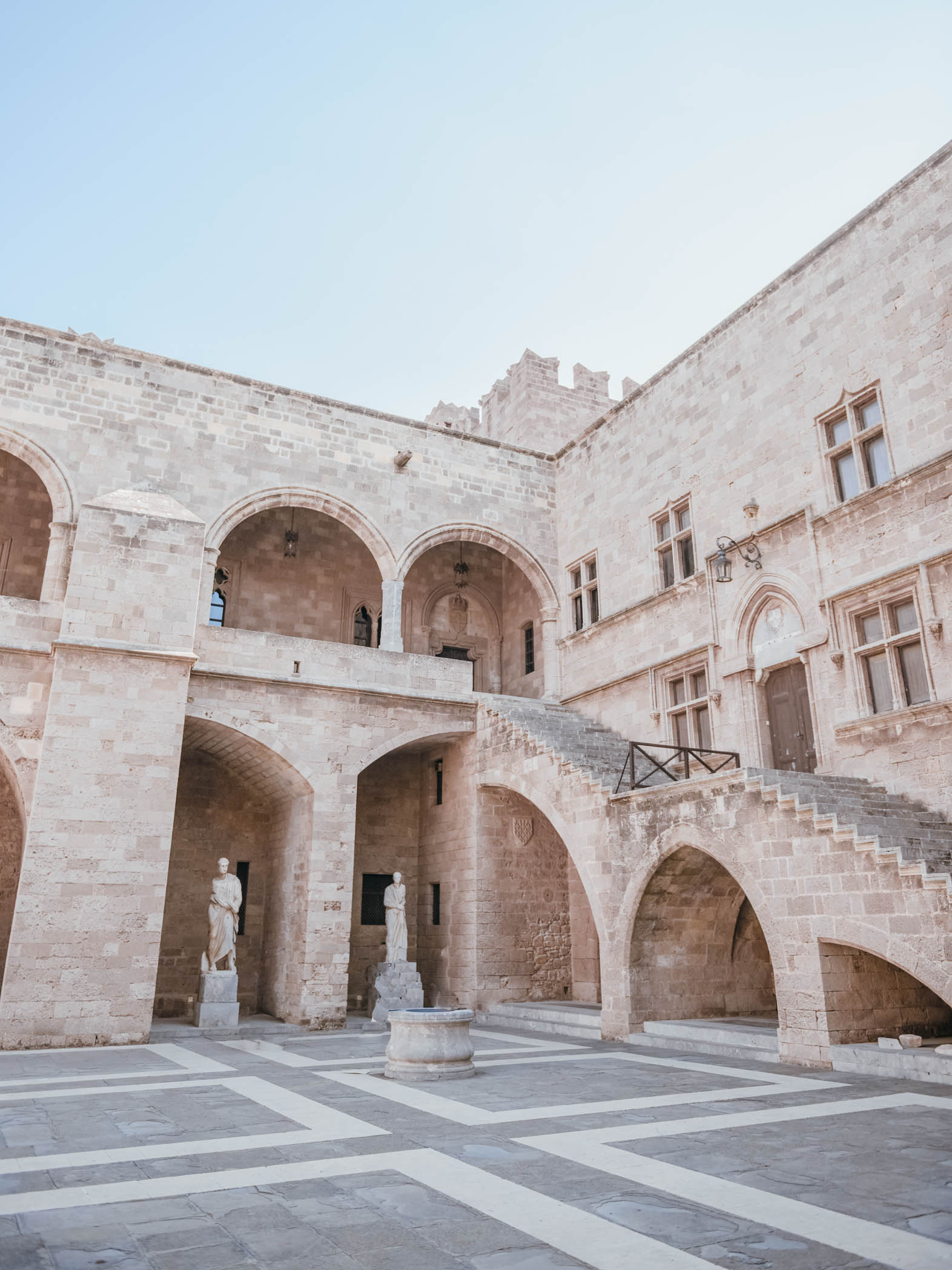 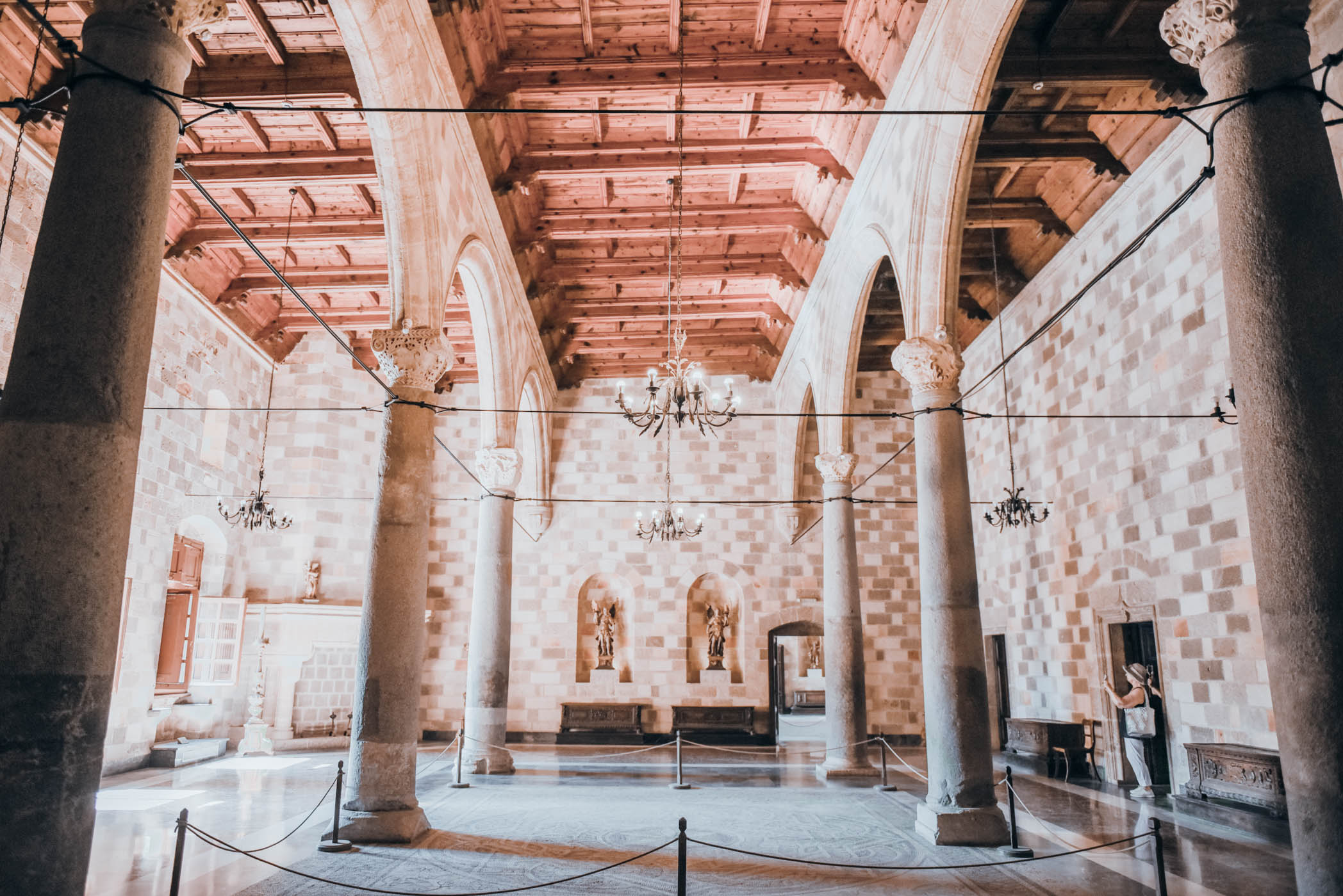 Argyrokastro Square and the Decorative Arts Museum of Rhodes

Argyrokastro Square or Square of the Hebrew Martyrs is one of the most picturesque places in the Old Town.

As you stand in the medieval square with flowers climbing up the buildings and water flowing from the well in the center, you feel like an extra in a Game of Thrones scene. By itself, it isn’t much, but with a little imagination, it can become a new world.

I would recommend getting here early in the day to snag a great picture. The square does tend to get full around midday with tourists walking by and stopping to top off their water bottles.

We did not go inside the museum, but if you like to see various designs on ceramics you will like this museum. From the reviews I read online, the museum is one big room with rows and rows of decorated plates on the walls and a small section on textiles. However, it was noted that there was a lack of information on the exhibit pieces.

Tickets: If you purchase the special ticket package for €10 at the Grand MAster’s Palace, that includes your admission. 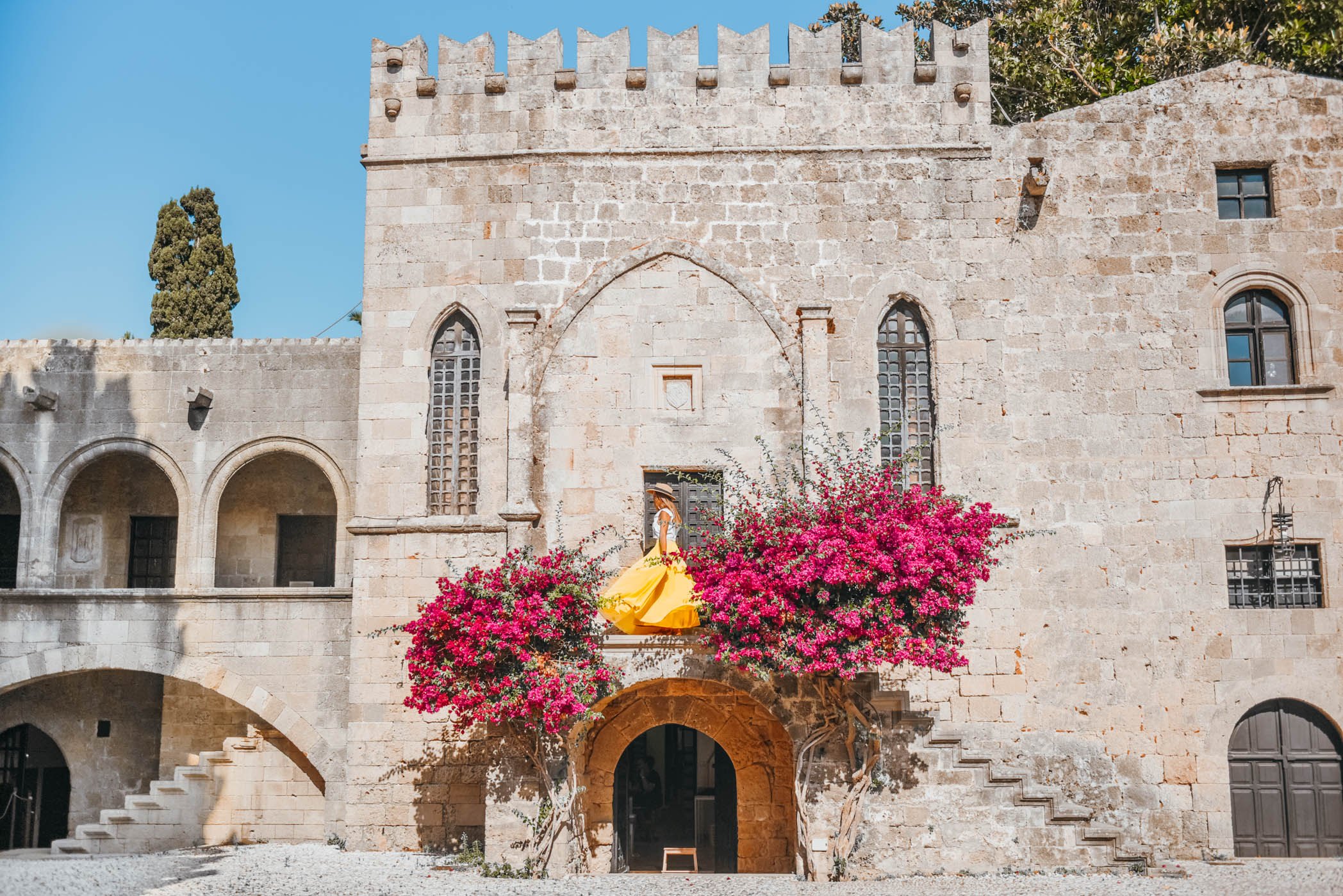 The Mosque of Suleiman the Magnificent

All “great” things must come to an end. Rhodes finally fell in 1522 after a six-month siege carried out by Suleyman II. The Mosque of Suleiman was built to commemorate Suleyman’s conquest of Rhodes. Unsurprisingly, it was the first mosque in the town of Rhodes.

It is easy to spot as the Mosque’s tower peaks above the medieval skyline. Even as you approach by boat, you can quickly pick the Mosque’s pink dome out of the cityscape.

Unfortunately, the mosque is close to the public so if you wish to get a great view of this structure, I recommend going to the top of Roloi Clock Tower. 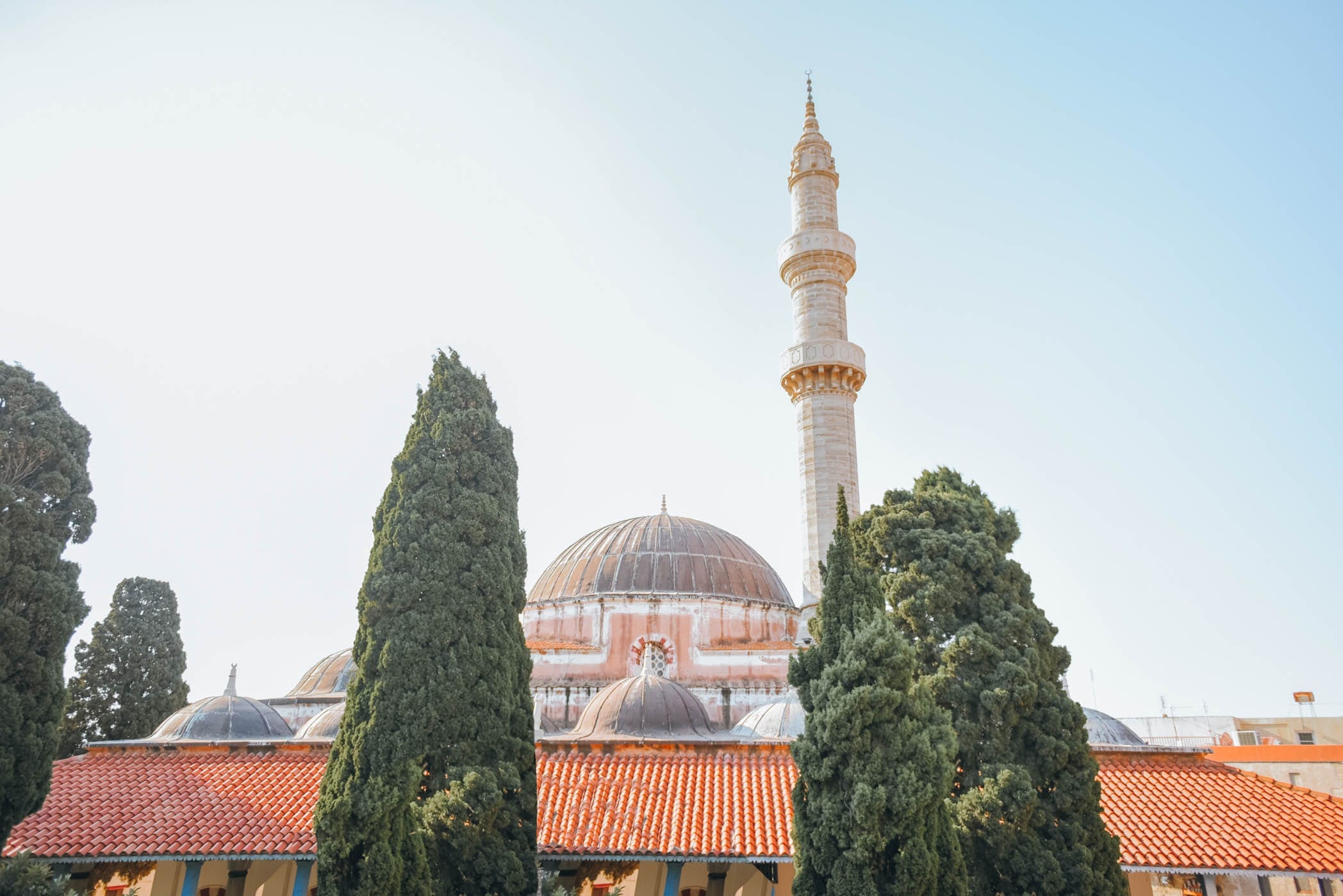 Peering above the city like a watchful eye, this 7th-century tower offers some of the best panoramic views of the Medieval City of Rhodes and the Port of Rhodes. As a bonus, the entrance fee includes a free drink on the terrace below.

Anywhere you walk in the city, you can see this tower. At the change of an hour, you can also hear the clock strike! 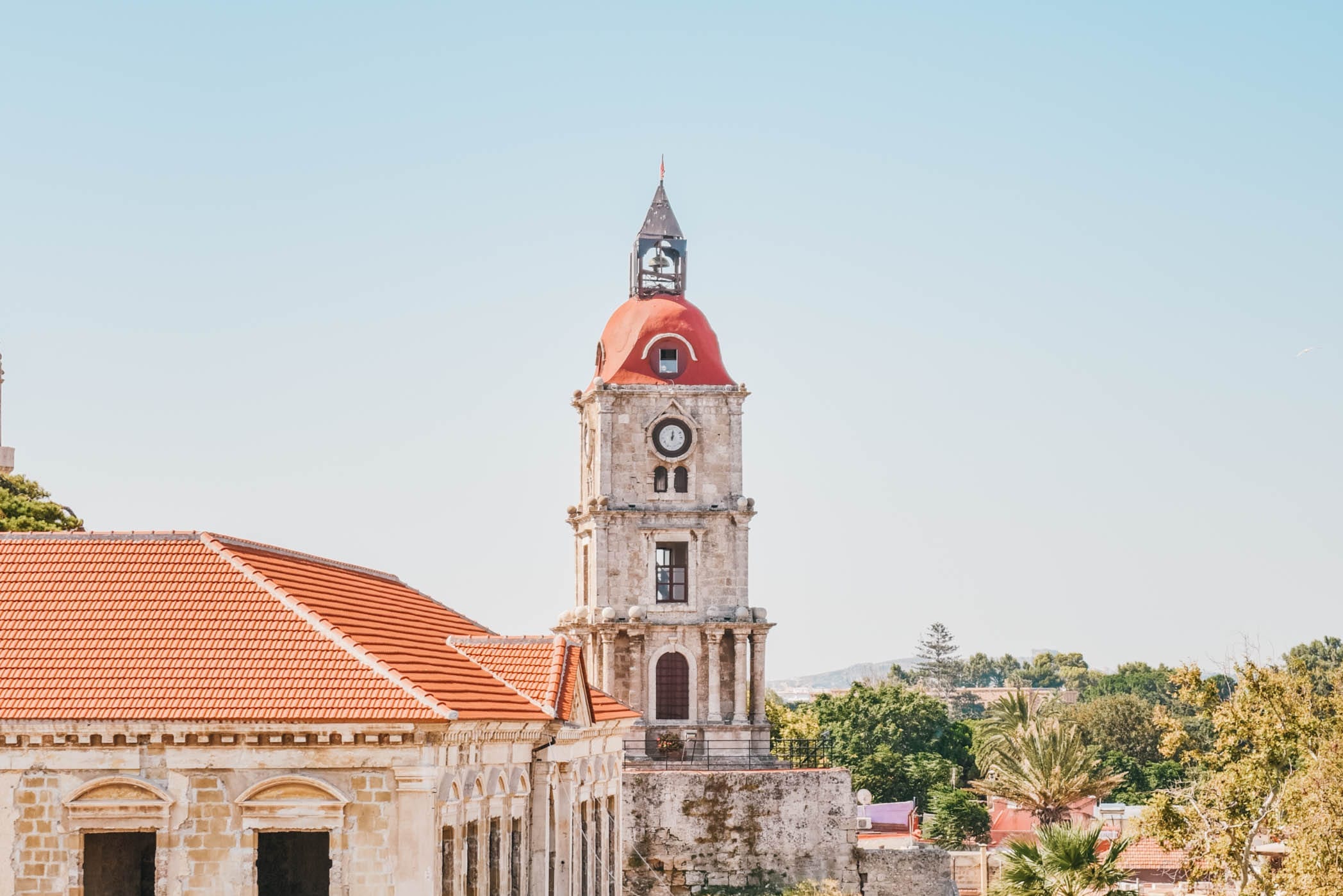 If you want a postcard picture from Rhodes just head outside the wall to Parko Therme. We actually had an odd encounter at this park.

When we travel, we take a lot of pictures (duh). Each time we find a new location, we have to figure out who is going to be in the picture and how the picture will be taken. For this particular location, we decided to take a picture of the both of us (which means we have to use the tripod). However, whenever we use the tripod, there is a risk of someone running up, grabbing our equipment and running away. ⠀

When we first entered Parko Therme, I noticed there were a lot of gypsies hanging around. I didn’t think it would be a problem, however, as we were prepping for this picture they kept creeping closer and closer to us. We finally stopped and just stood there looking at them so they knew we were watching.
⠀
As I continued setting up the picture, four gypsy kids came up and wouldn’t leave us alone. Eventually, Layton yelled at them to scram. As they were leaving, one kid kept pointing his middle finger at us and yelling the F word (one of the few English words he knew). It was slightly entertaining, but concerning at the same time. In the long run, we got the picture of both of us and camera was not stolen.
⠀
Moral of the story: each picture has a story and a lot of work goes into each one. Also, be aware of your surroundings. 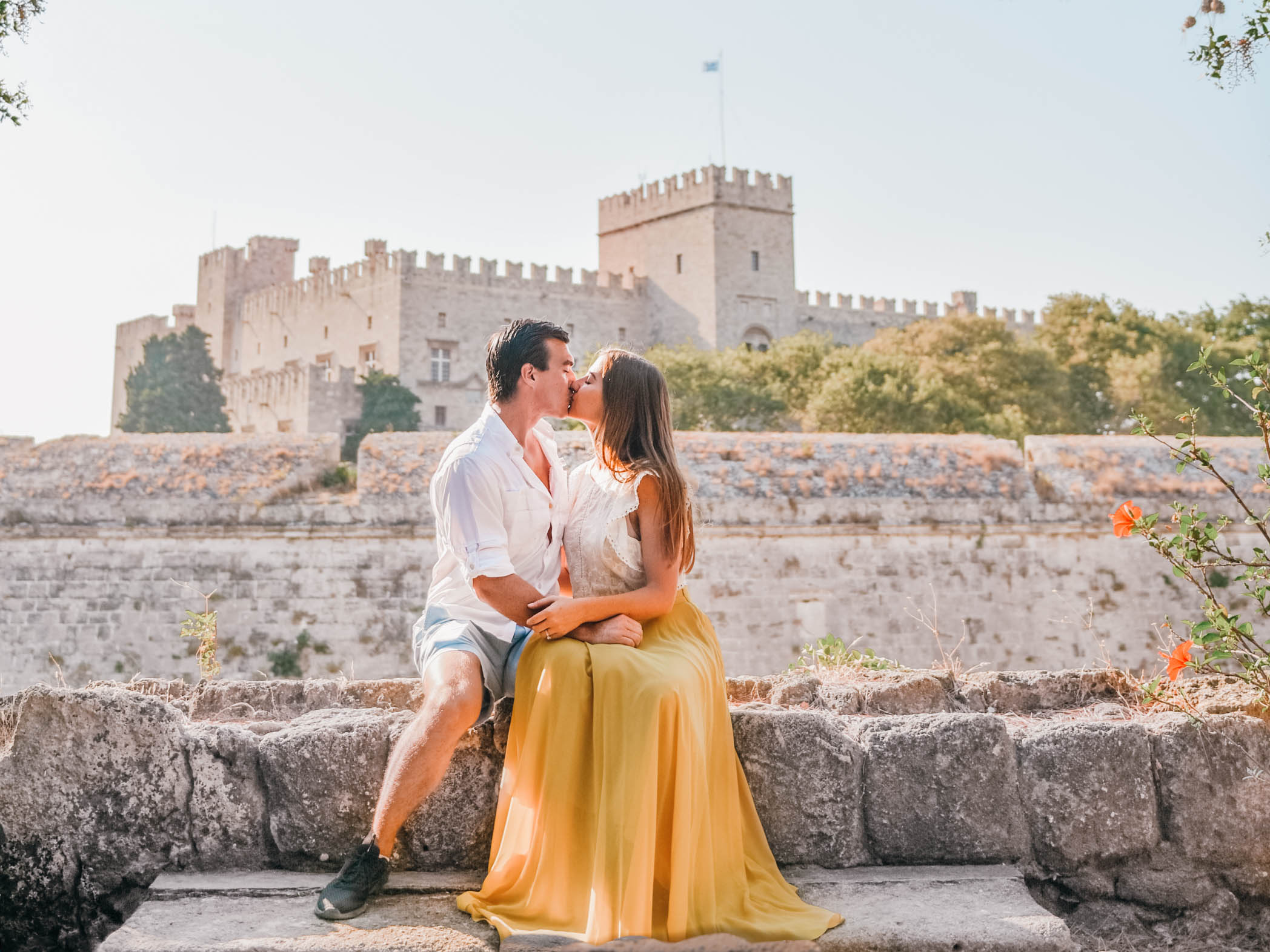 The Mediterranean is nearly as famous for the Greek windmills lining each island as it is for the sunsets illuminating the evening Mediterranean sky.

The windmills in Rhodes are right by the port, just a walk down from the yacht docks. These aren’t the most picturesque windmills in the world, but they are still a site to see. 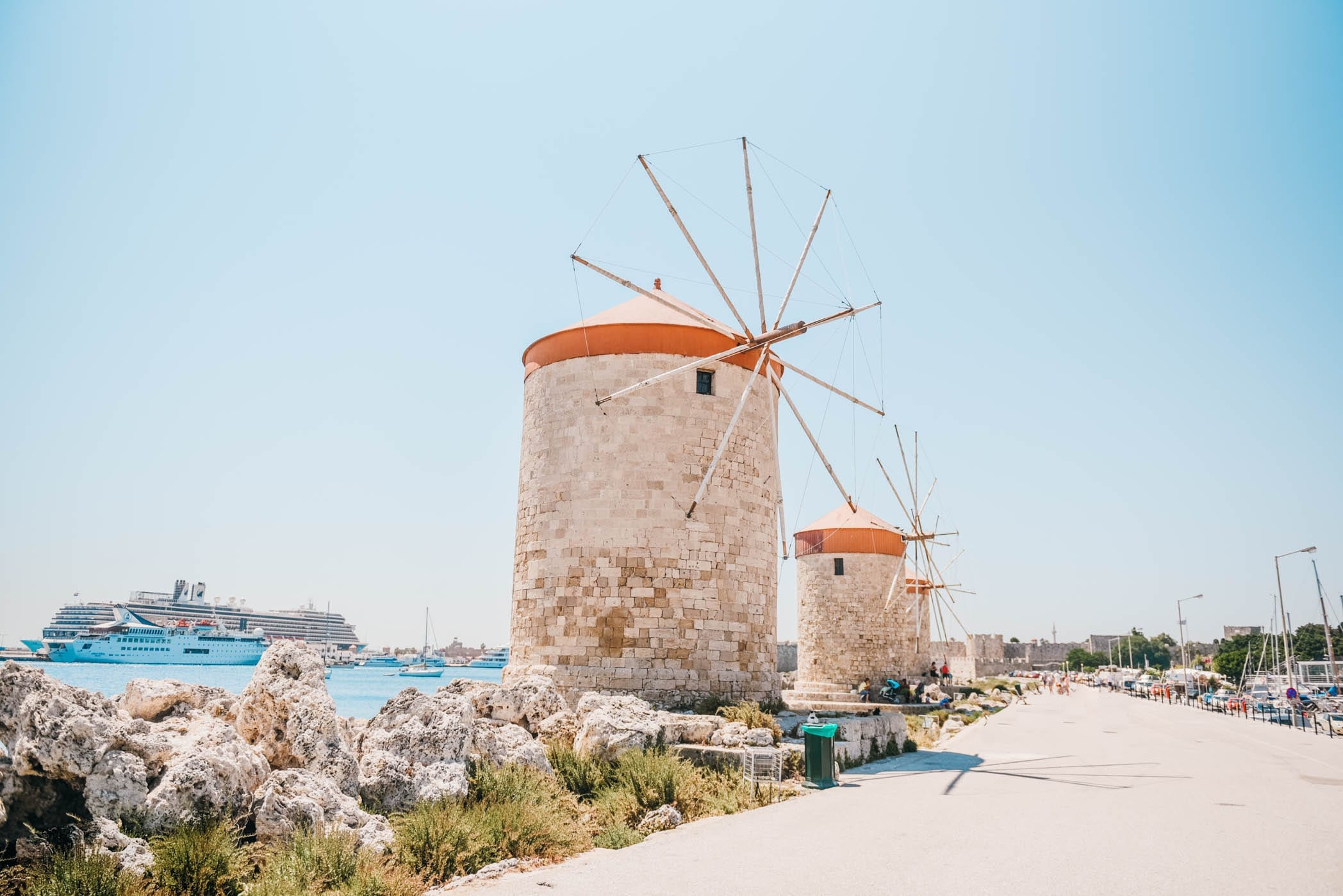 Last, but certainly not least, the streets of the medieval city are enchanting by themselves.

We explored the city starting at 7 AM, and I wish we could’ve started earlier. Nothing was open. No one was awake, except for the cats inhabiting the doorsteps. It was magical to walk through a medieval city all by ourselves. Everywhere we turned there was a beautiful spot for another photo.

As the day progressed, shops started to open and the smell of breakfast and coffee filled the air. Piquing our appetite. We snagged a quick bite and went back into the city to explore. Not soon after, more tourists were sharing the streets crusaders used to walk with us.

By lunchtime, the summer sun was melting all of us, so it was necessary to stop in a small shop for a cold drink. We finished our self-guided tour of the city after we were rehydrated.

All in all, The Medieval City of Rhodes holds something for everyone. 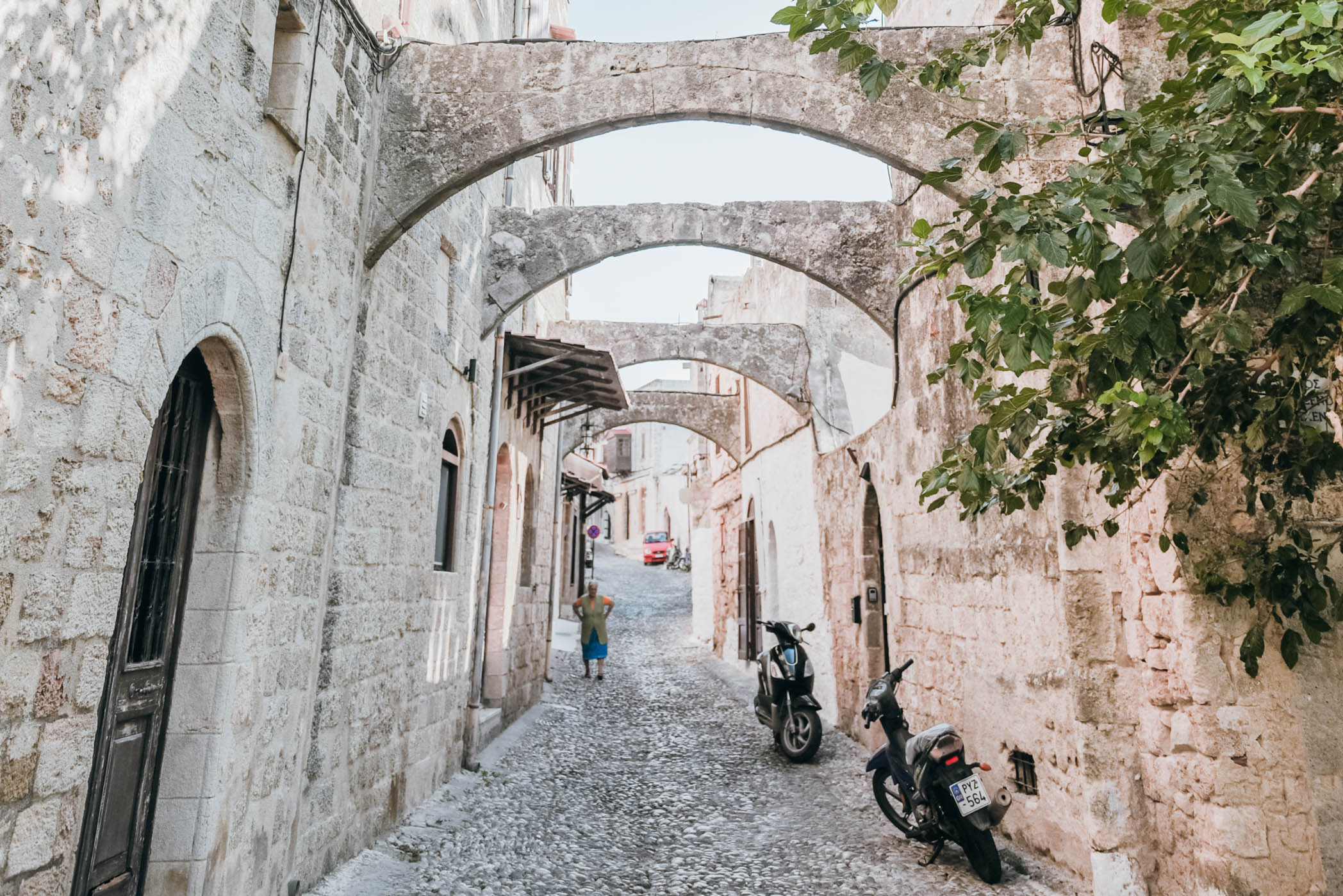 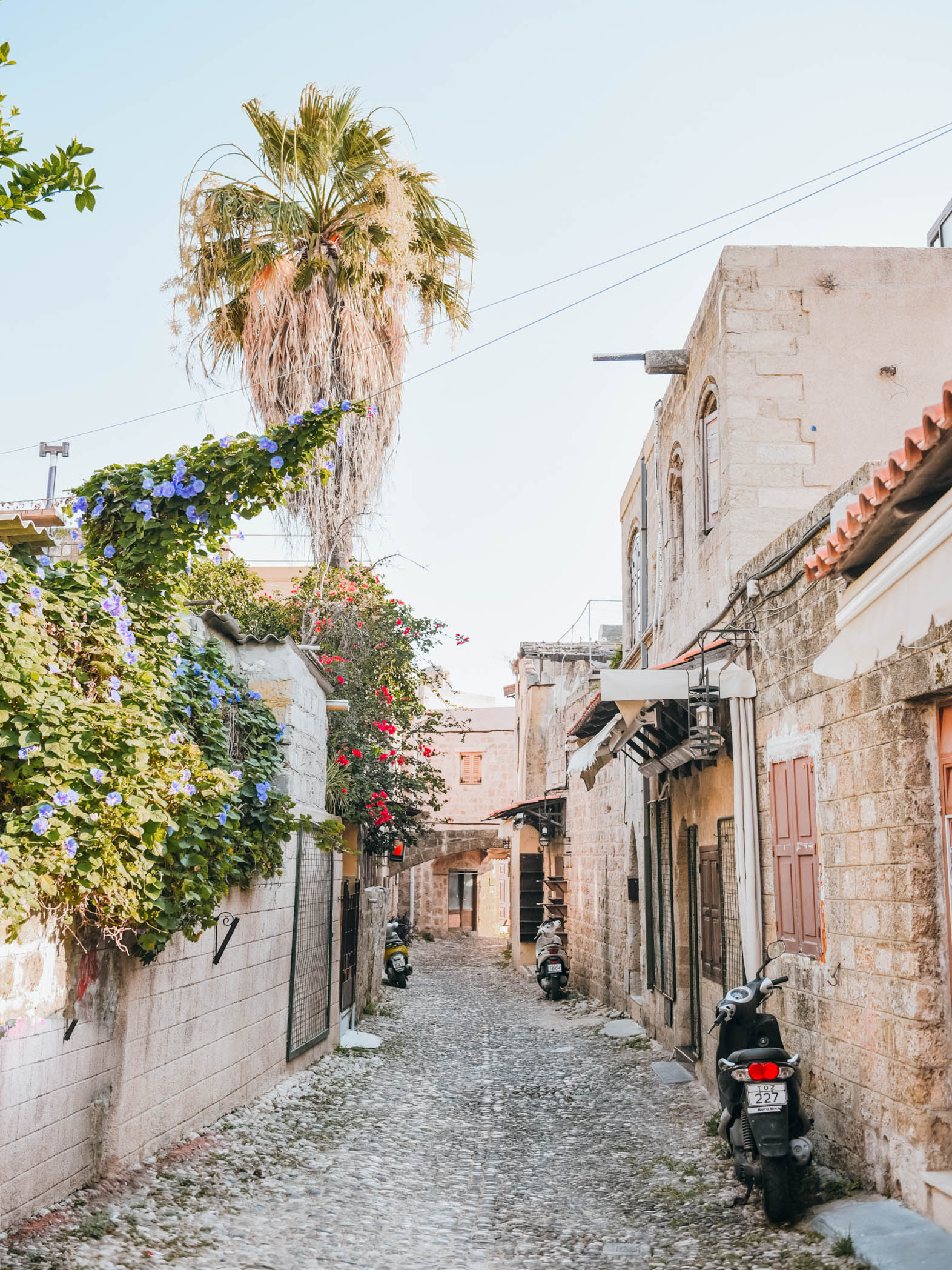 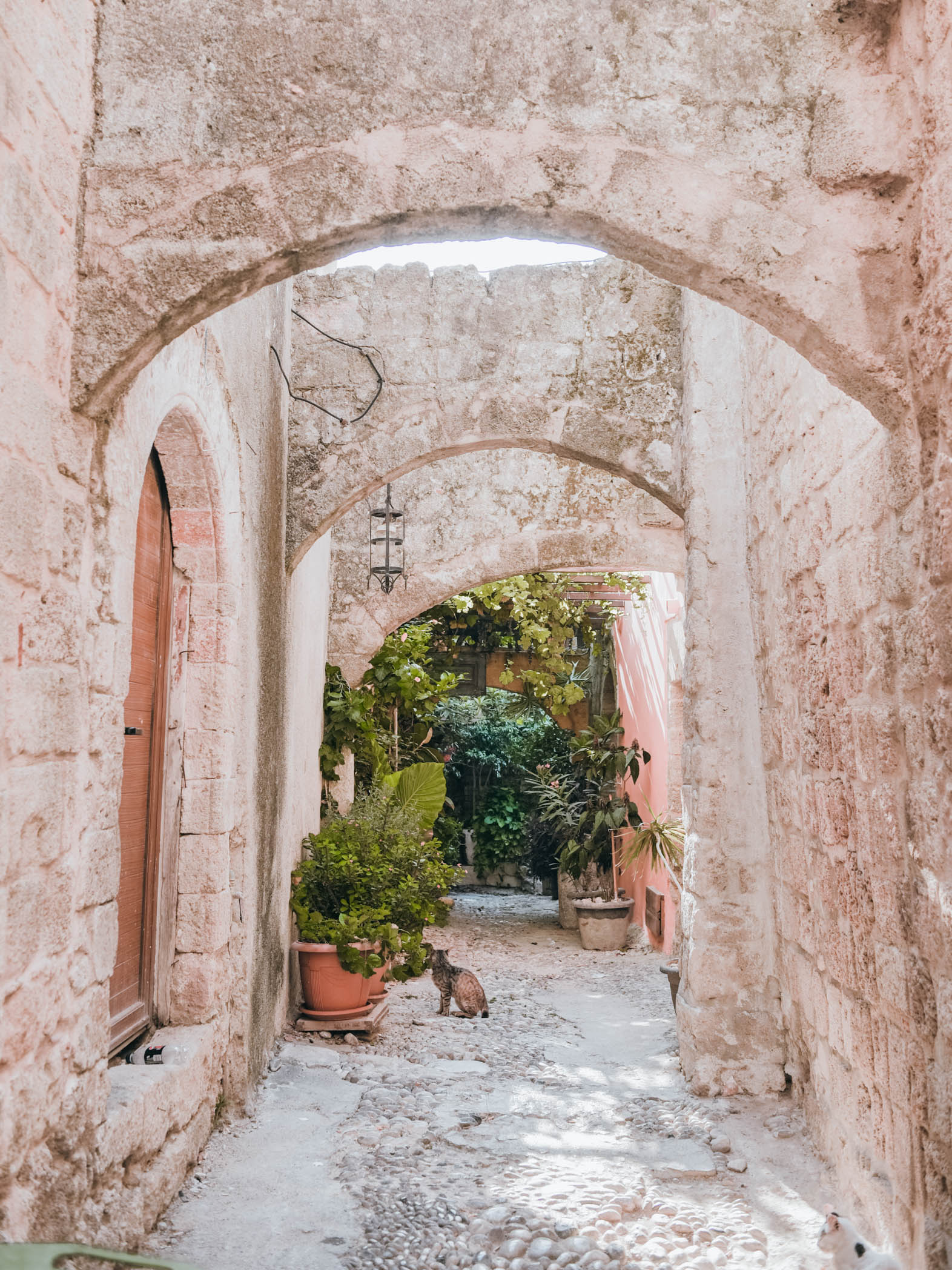 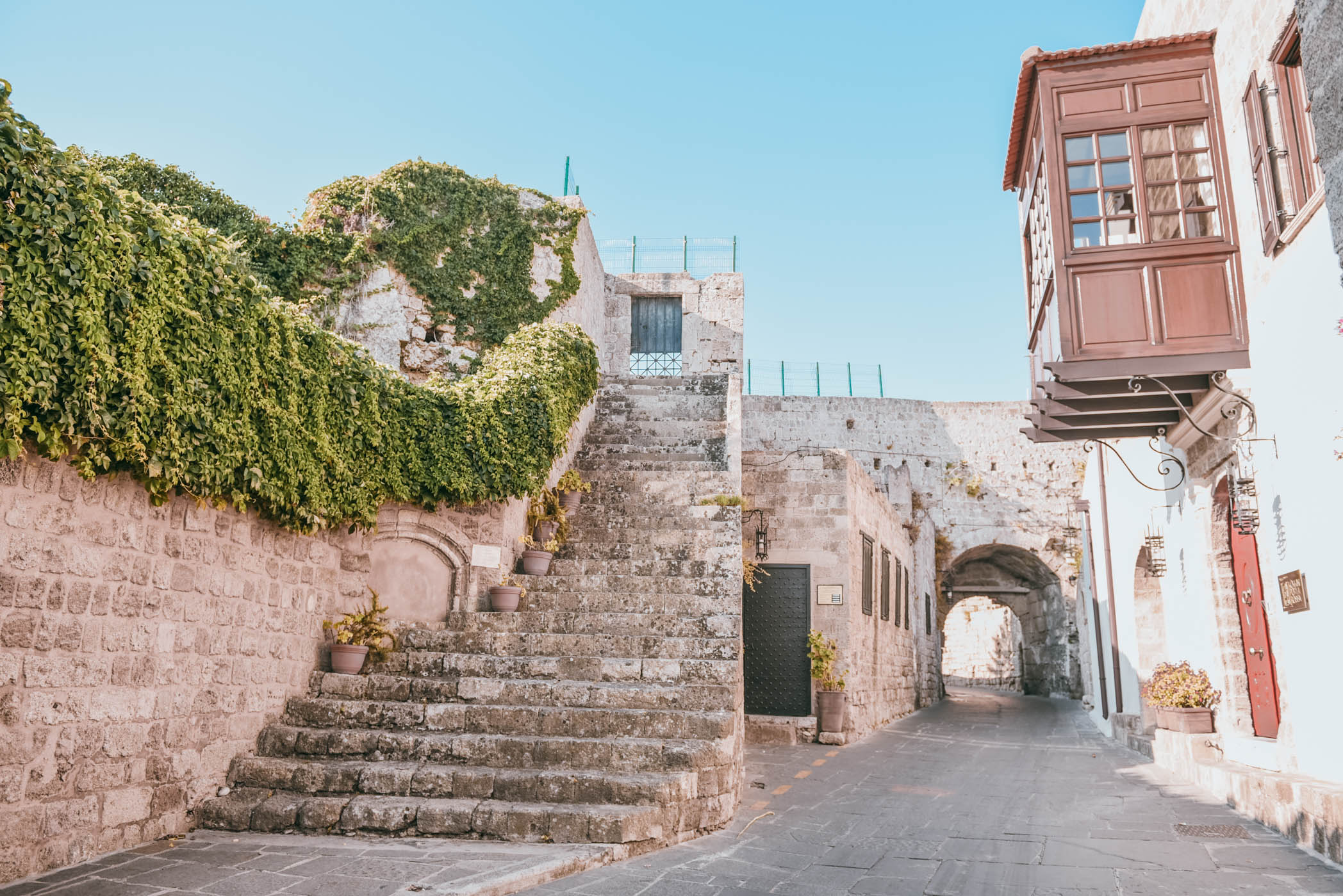 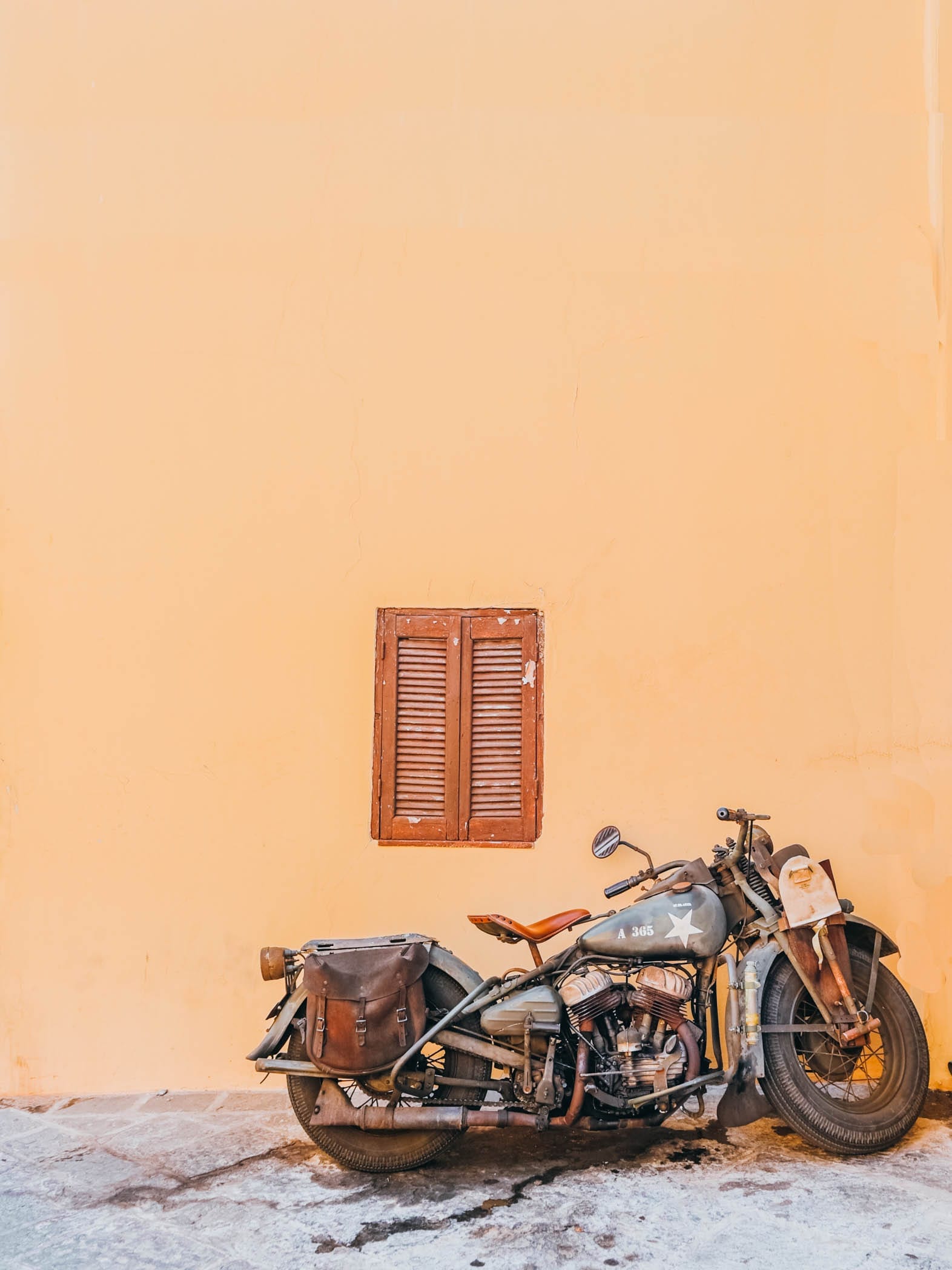 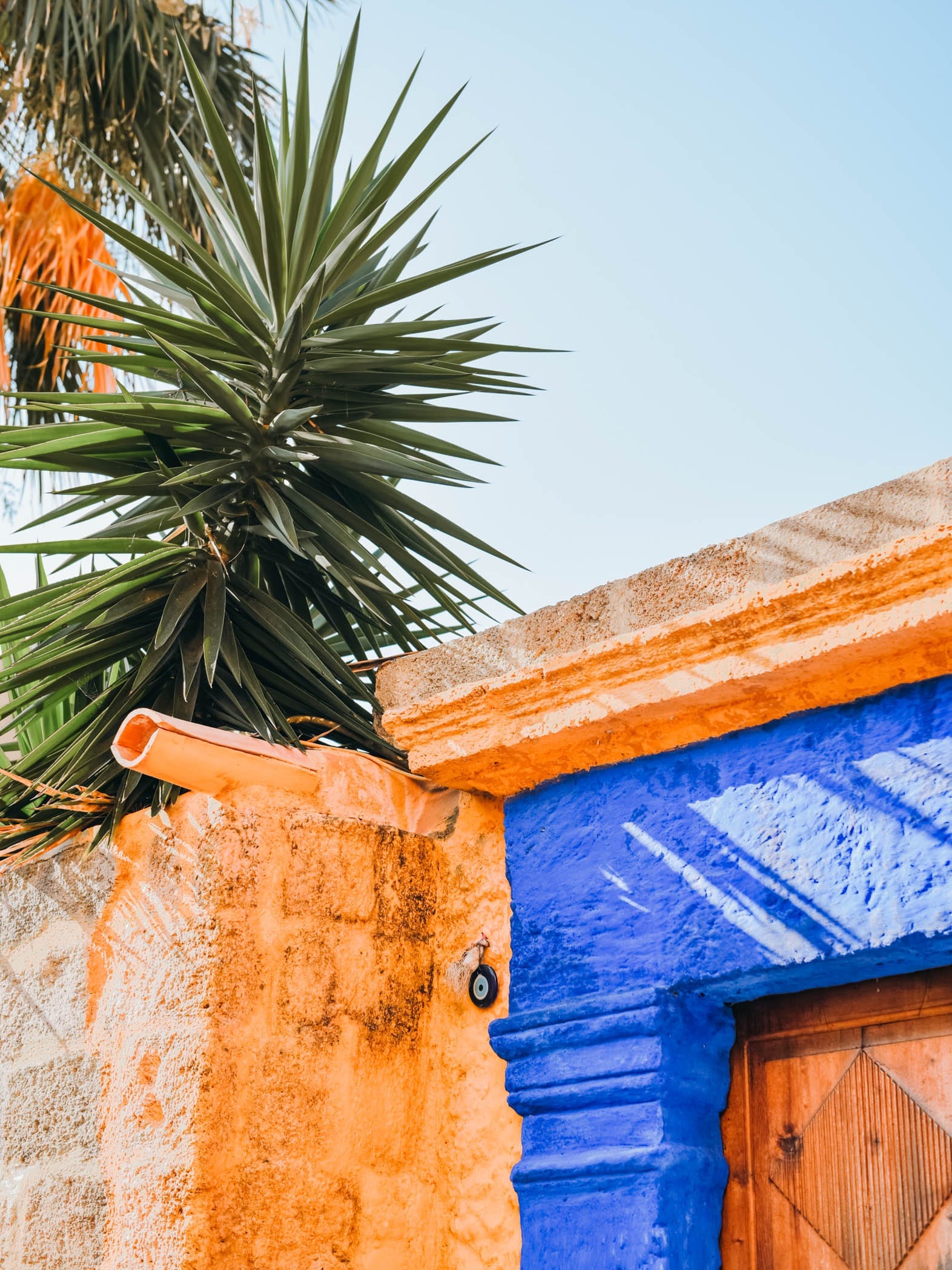 Is there anything I left out that is a must see in the Old Town of Medieval Rhodes?? If you’ve never been, which place are you most interested in seeing? Let me know in the comments below.