The sting of the rain whipped against our faces as the small speedboat fought the waves off the northeast coast of Puerto Rico. My husband grabbed our towel to protect us from the sea, rain, and wind.

And then, just as quickly as the storm arrived, it was peaceful again.

We had just spent the entire day exploring islands off the coast of Puerto Rico and were on our way back to Fajardo to spend the night when the storm hit. It had been a bit windy all day, but it didn’t happen to rain until we were on the water. Luckily, it is only about a 30-minute boat ride from the last island we explored to shore, but with the rain stinging you in the face, those 30-minutes feel more like an hour!

It was December of 2016, pre-hurricane, and my husband and I were exploring the eastern portion of Puerto Rico. This was our first full day on the island and we decided to check out some of the surrounding islands!

On the eastern side of Puerto Rico, there is a little chain of smaller islands that are extremely popular with the locals for vacations and day trips. Icacos, Ratones, Lobos, Blanquilla, Diablo, Palomino, and Palominitos make up this small archipelago. Unfortunately, is it pretty hard to get to some of them given the reefs and rocks surrounding them. However, Icacos, Palomino, and Palominitos remain popular beach destinations.

Below, I talk about Icacos and Palomino. What we did, how we got there, what we loved, what we disliked, and why you should go!

For more adventures in Puerto Rico, be sure to also check out my blog posts on “A Guide To Visiting San Juan”,  “Exploring El Yunque National Park”, and “Day Trip To Vieques“. 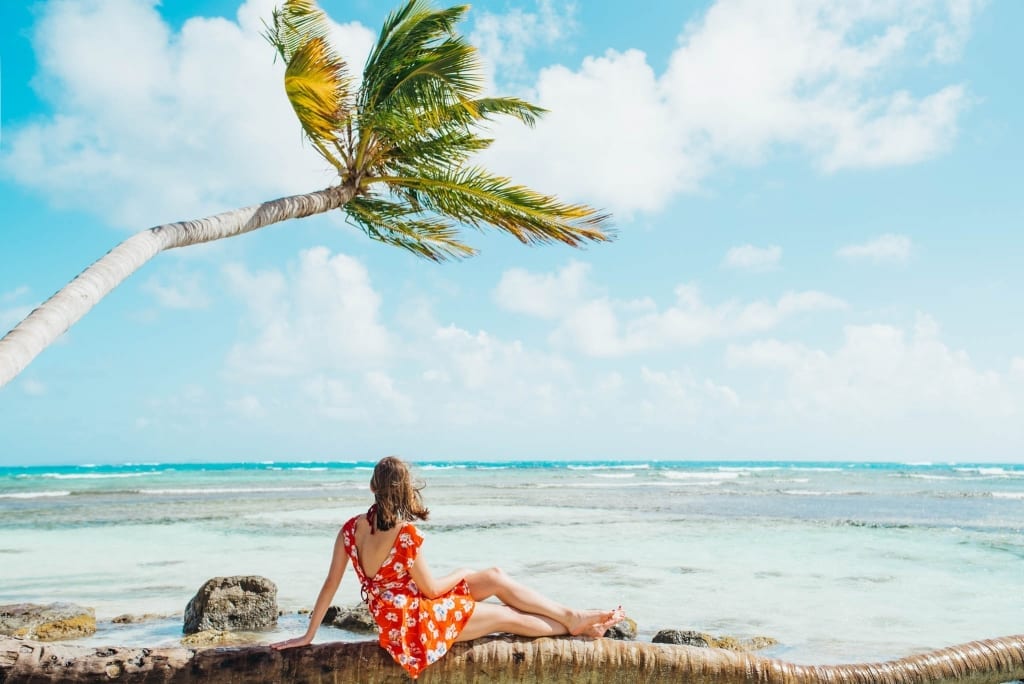 Icacos Island, aka Cayo Icacos, is a small uninhabited island. Known for snorkeling and its beautiful beach, it is a popular destination for the locals on the east side of Puerto Rico.

We met our water taxi, which we booked online at https://www.facebook.com/alexmandibula/, around 8:15AM. For $200, he took us to Icacos, Palomino, and back to Fajardo.

It was a pretty day, but there was some wind so the trip out to Icacos was a bit rough. However, you can’t complain when you are the first person to step foot on an uninhabited island that day! Most tours don’t start until 9AM and don’t make it to the island until 9:15, so we had nearly a full hour of exploring the beach, deserted pier, and water all to ourselves.

However, watch out for sea urchins!!! I stepped on one when we were walking around the west side of the island and it definitely hurt! The sea urchin was apparently already dead and had washed upon the shore. This meant it was still sharp and had a bit of poison in its spines, but not nearly as much as if it was alive.

Other than that misstep, we enjoyed exploring the shoreline until around 10:30 or so. At that point, it was time to explore Palomino island!

For more adventures in Puerto Rico, be sure to also check out my blog posts on “A Guide To Visiting San Juan”,  “Exploring El Yunque National Park”, and “Day Trip To Vieques Island“. 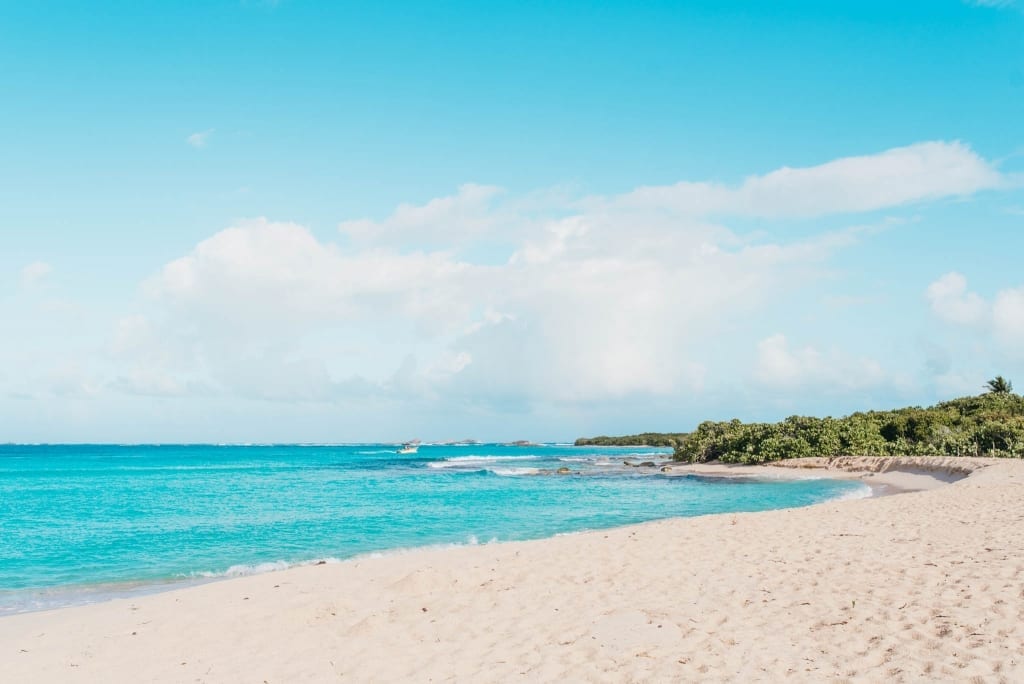 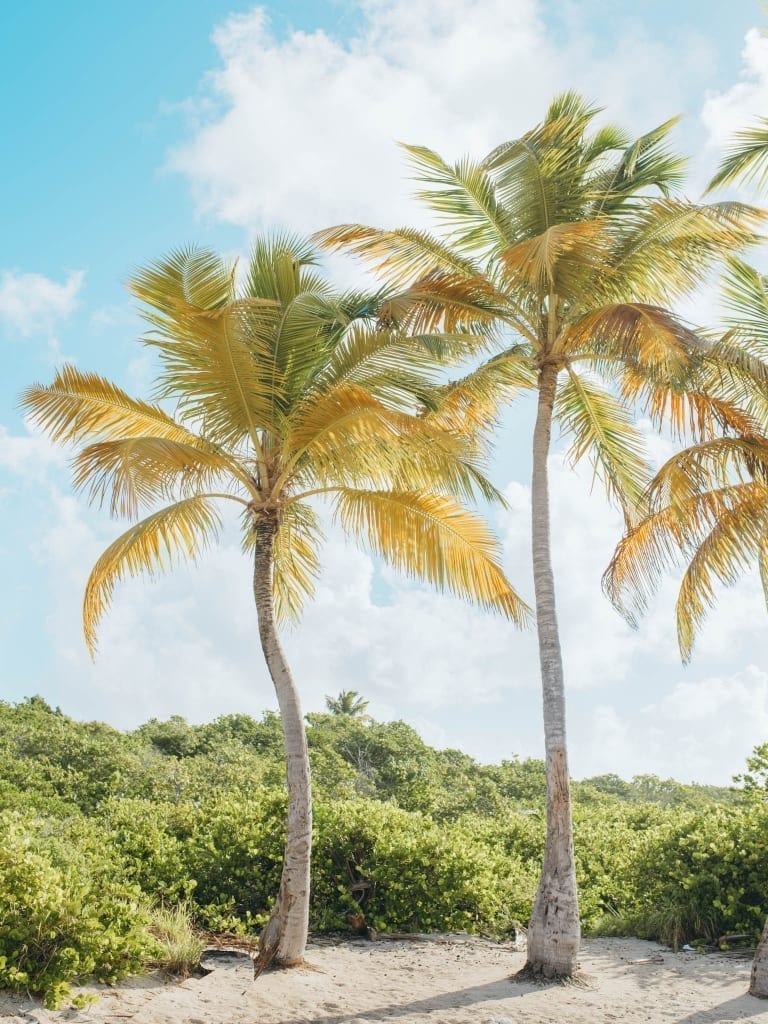 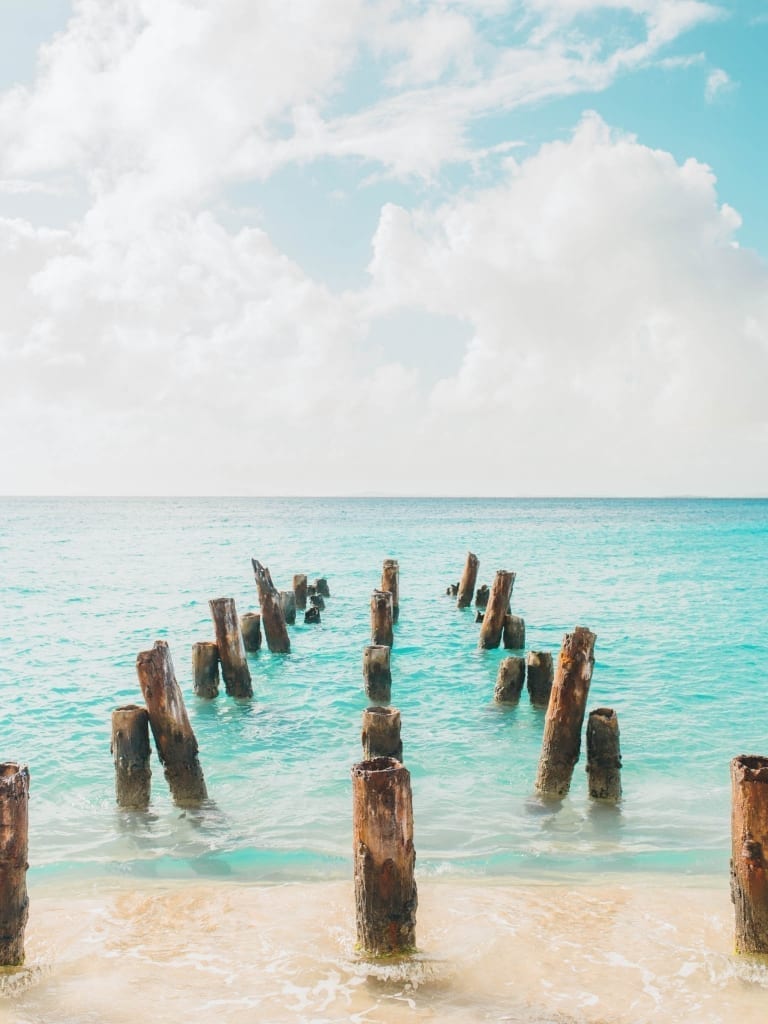 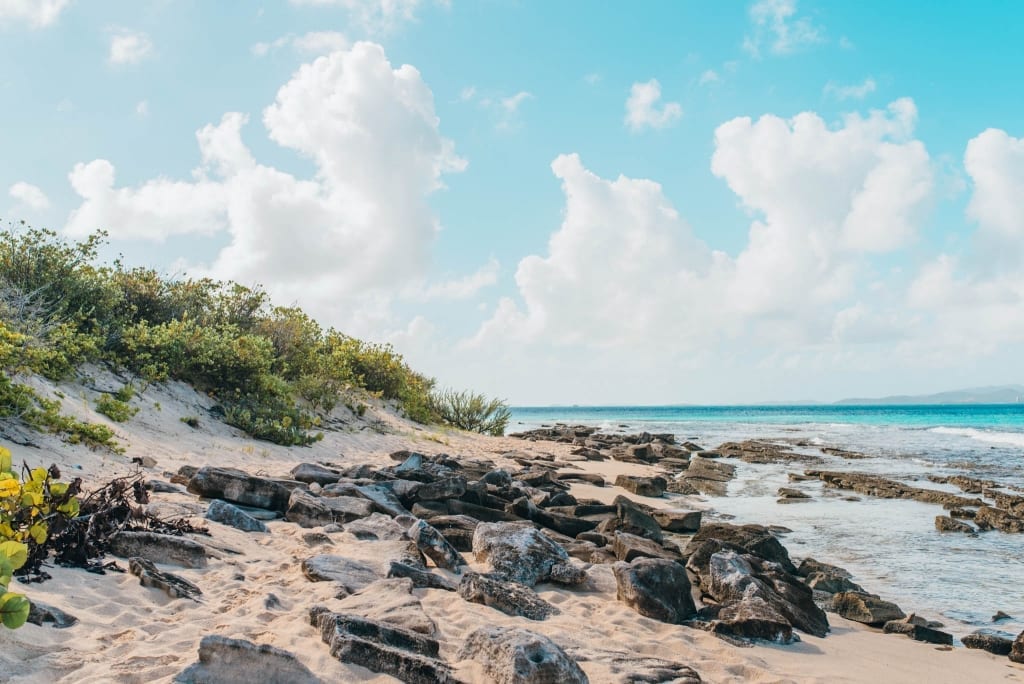 Isla Palomino, aka Palomino Island, is the largest of three private islands near Puerto Rico, the other two being Isla de Ramos and Isla de Lobos. Most of the island is rented to El Conquistador Resort for their beach and water activities.

The El Conquistador Resort has rented the eastern side of the island for their guests. We were not guests. However, our water taxi dropped us off on the beach next to the El Conquistador where we just walked over. The staff at the resort seemed pretty apathetic to keeping us out…..they actually didn’t care at all.

We went up to the gate, which is on the dock where the large El Conquistador Ferry docks, and it was locked. There was a staff member on the other side, so we asked if we could come in. He looked at us and shrugged…..so we jumped the fence right in front of him. He didn’t look up at all. It’s possible we got a staff member who just didn’t care, but it is also possible they just don’t mind if a few non-guests come over and spend some money at their resort!

El Conquistador has really set the island up nicely. A reef surrounds their portion of the island, so while it was a bit windy, the water around the beach was calm. This allows for fantastic snorkeling, kayaking, sailing, and paddle boarding, all of which El Conquistador rents for an hourly fee. They even have horseback riding through the trails in the mangrove forest of the island!

However, my favorite part was the iguanas! If you’ve seen my Instagram or read some of my other blogs (specifically on Exuma or Cancun) you know I love Iguanas!!! Aptly named, Iguana’s, the beachfront bar on Palomino Island, was crawling with them. I left Layton for 20 minutes or so to go play with them. We also snagged some food there and it was delicious!

From about 1PM to 4PM we explored the islands beach, reef, and palm trees. Between you and me, I think these pictures are really what got my Instagram going so quickly when I first started!

It was one of the most tranquil spots I’ve been. With the wind lapping at the palm fronds and the waves beating upon the reef, nature has a way to soothe your worries and stresses better than any drug in existence. Time flew by an before we knew it, it was time to head home.

Off the shore of Palomino island is Palominito Island, which is a tiny deserted island that became famous for a scene in Pirates of the Caribbean. We didn’t spend the time to explore the island, it was very small and you could see pretty much everything from the boat, so we just boated by on the way home. 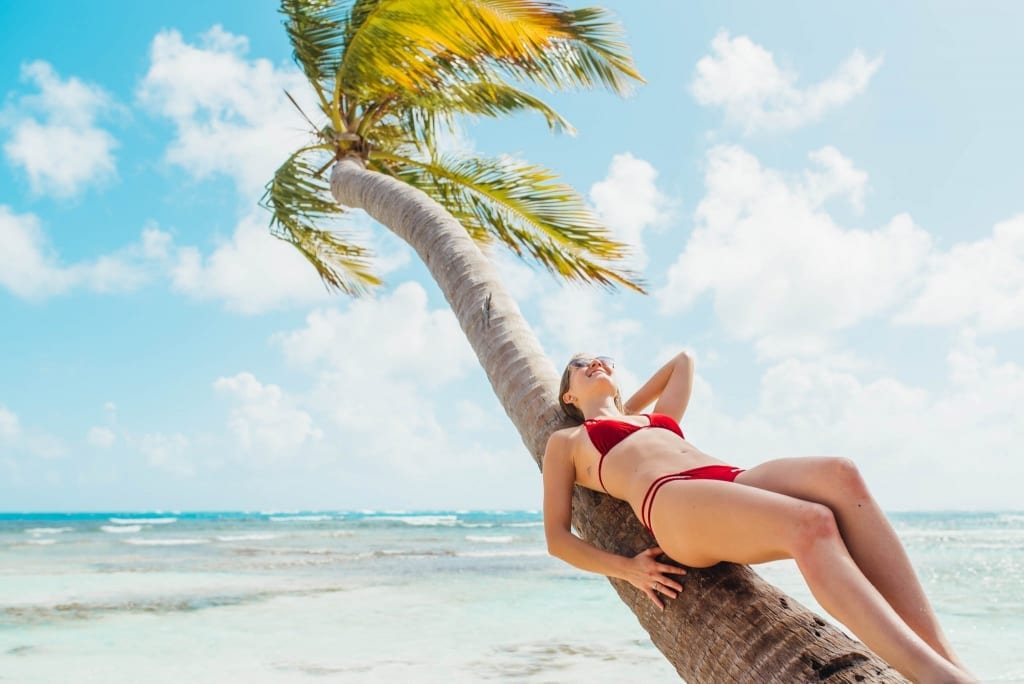 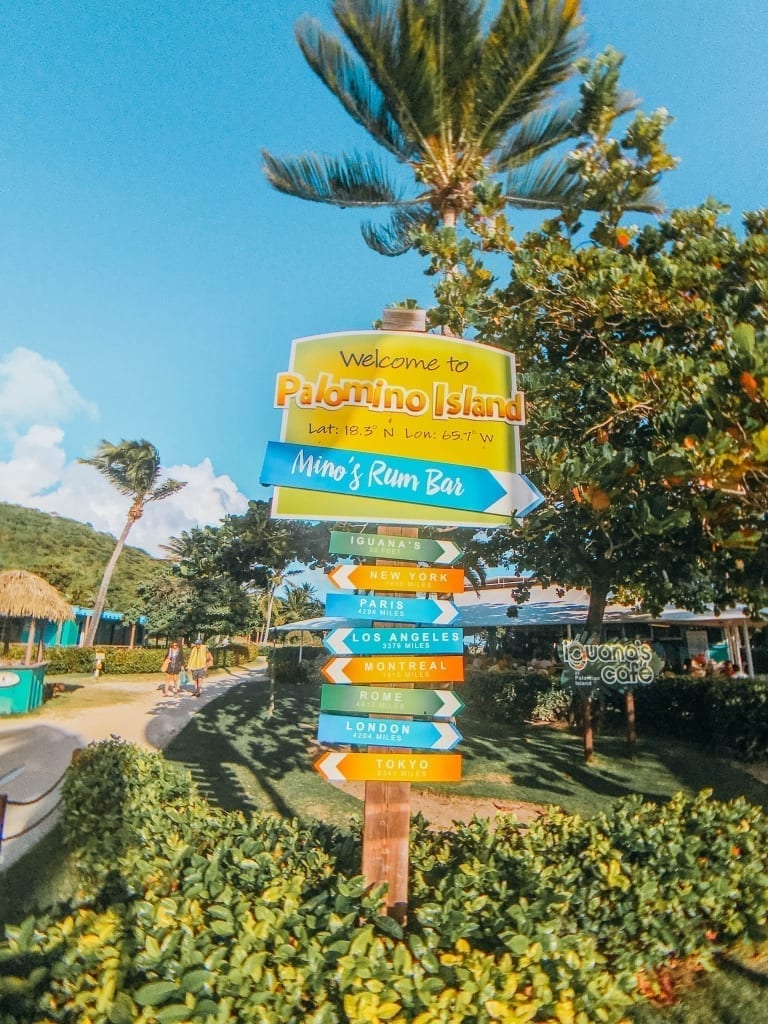 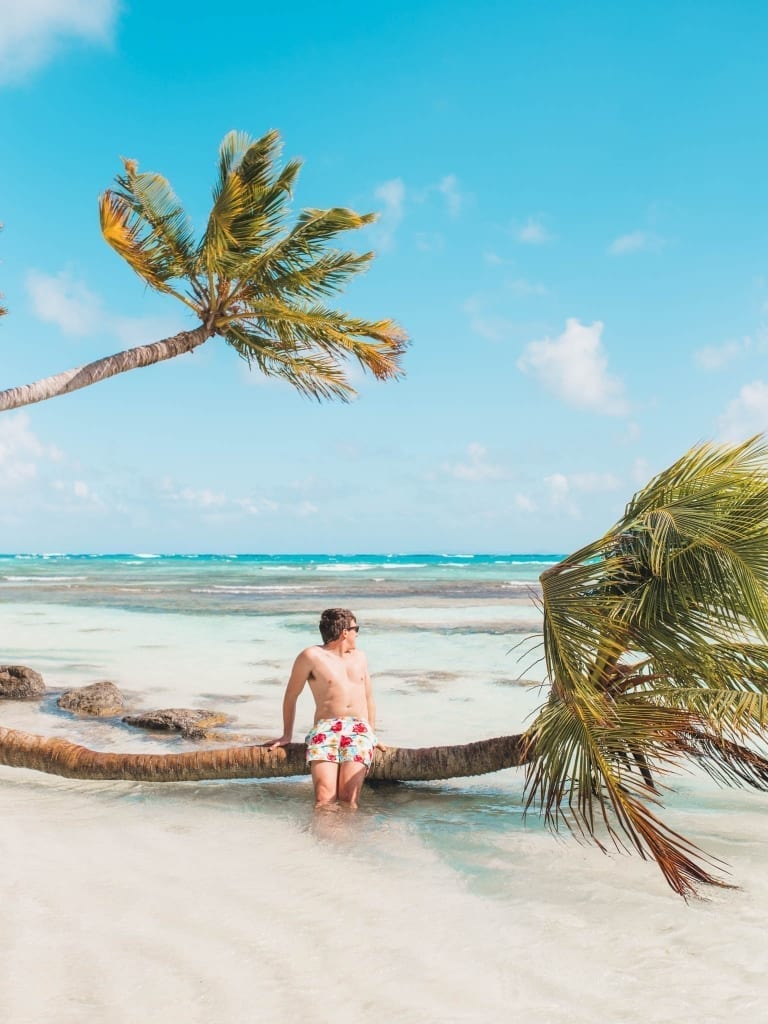 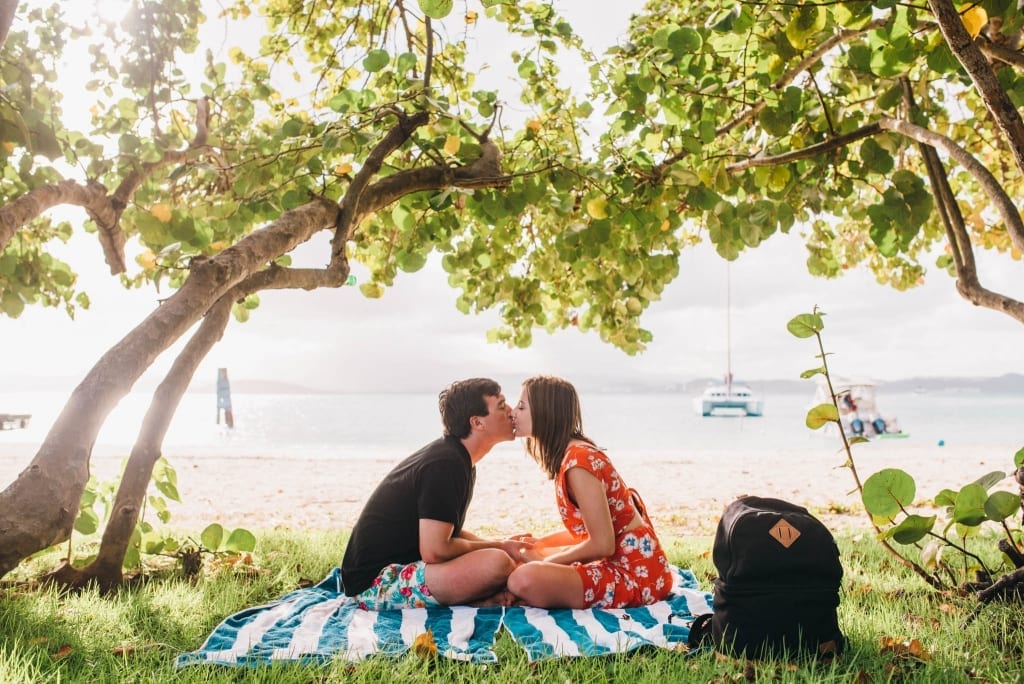 If you are ever in Eastern Puerto Rico, you must explore Icacos Island and Palomino Island! What are some of your favorite island hopping adventures?