So, you were caught speeding in Iceland. Join the club!

In March 2018, I went on a 7-day road trip around Iceland’s Ring Road where I drove a total of 967.7 miles. You can read about that here – An Epic 7-Day Iceland Road Trip In March. On the sixth day, driving between Hvammstangi and Arnarstapi, I saw a van with flashing lights driving towards me. Naturally, I thought it was an ambulance so I pulled over. To my surprise, the van veered into my lane and park right in front of my car. 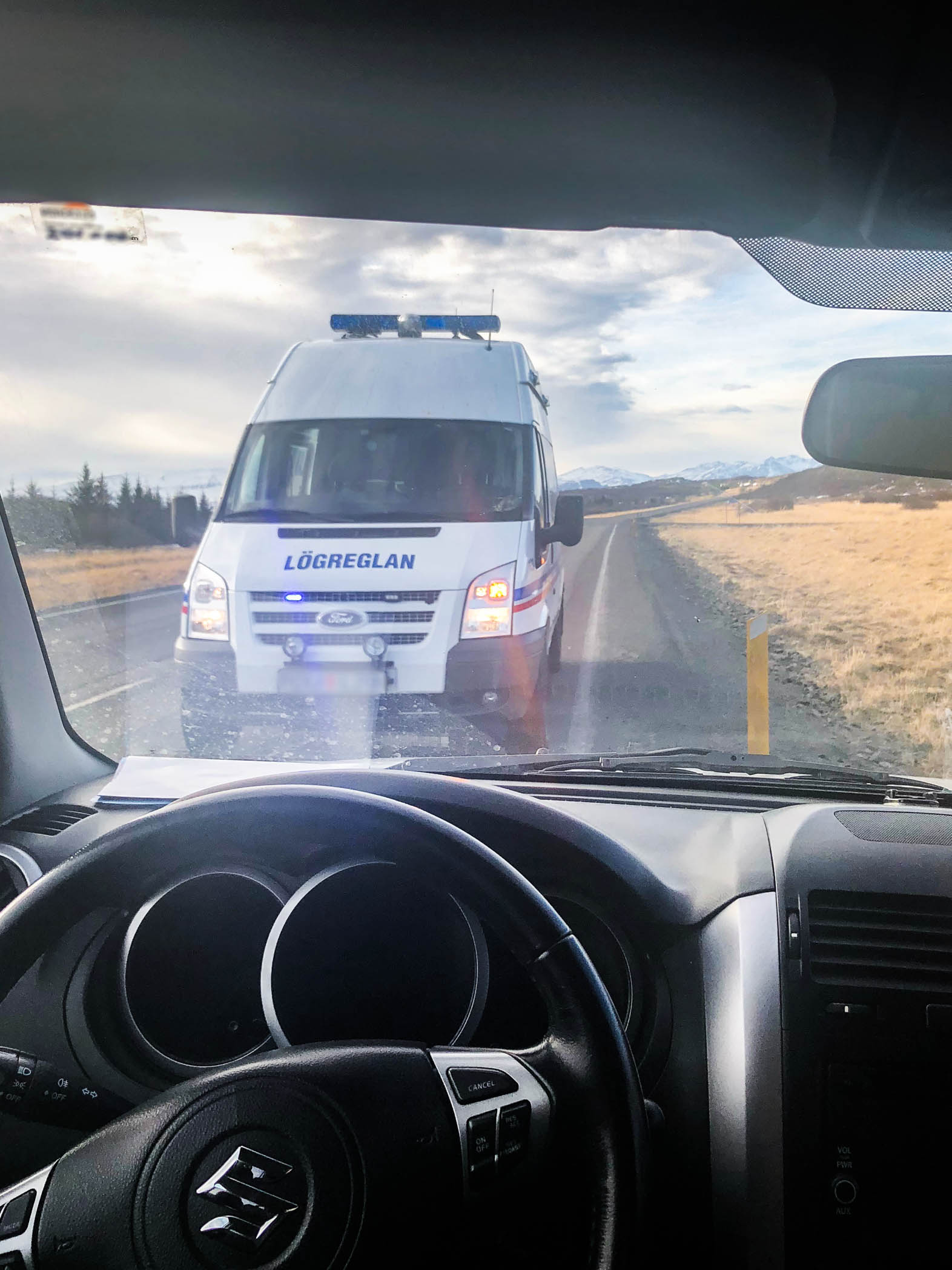 The police officer came up to my window and asked me to get out of the car. He escorted me inside the van where I was seated at a desk.  The second officer explained the 90 km/h speed limit and showed the van clocked me driving 113 km/h (70 mph). Yikes! Definitely 100% in the wrong.

As they were reviewing my license and the rental car’s registration, they gave me the option to pay on the spot or receive the ticket later in the mail. If I paid then and there, they would give me a 25% discount. Instead of paying 30,000 ISK ($247 USD), the fine would be 22,500 ISK ($185 USD). I decided to pay the ticket immediately using my credit card.

Afterward, they gave me a copy of the ticket and receipt, wished me well, and warned me about the many speed cameras along the way towards Reykjavik.

Overall, not a terrible experience. Sure it sucked, but I didn’t speed the rest of my trip. I also thought it was kind of them to warn me about the speed camera because I actually had no idea Iceland had any!

How Do You Get A Ticket?

By going over the speed limit, of course.

You may have noticed as you drive around Iceland, especially outside of Reykjavik, there are not a lot of police. However, there are many speed cameras around Reykjavik, tunnel areas, and the Ring Road.

The maximum speed on most paved roads outside of towns and villages in Iceland is 90 km/hr, which is 56 mph. The speed limit on unpaved roads is 80 km/hr or 49 mph. Sometimes, the speed limit can be even lower when turning a sharp corner or driving along a steep mountain road. So always keep your eyes open for a speed change.

No matter the speed limit, there are plenty of signs that keep you updated. Plus, there are signs that alert you when there’s an upcoming speed camera (see photo). 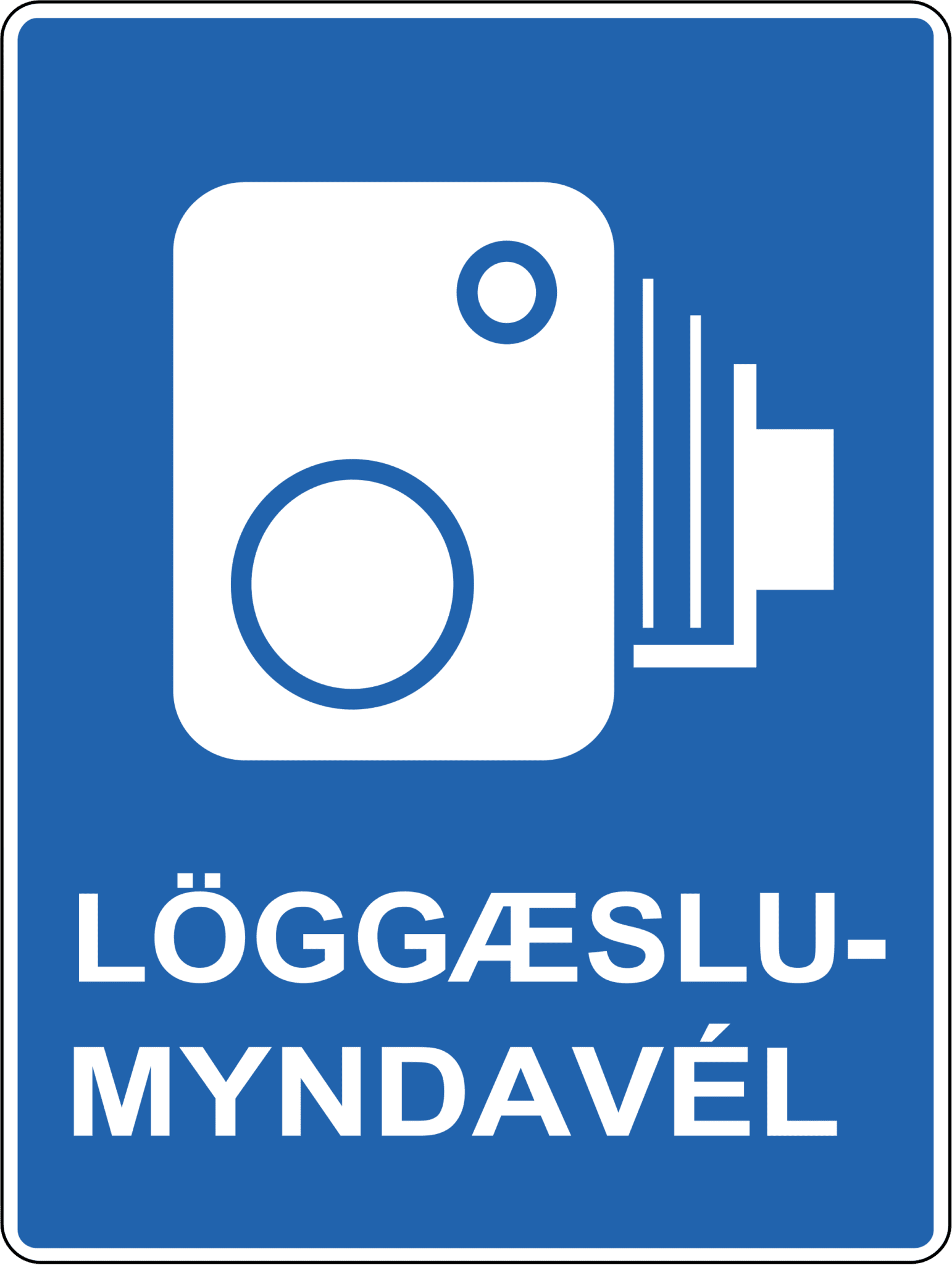 Just remember that speed limits are there for your protection. Iceland roads can be very dangerous all year long due to weather and the many twists and turns. So be safe by going the speed limit to prevent an accident, injury, or even death.

How Do You Pay Off Your Speeding Ticket?

If you get pulled over by the police (like me), you have three options.

If you get your ticket in the mail from a speed camera, you have two options.

Tip: Automatic speed-surveillance cameras are notoriously inaccurate. If they don’t have any visible proof of your speeding (short video segment or two photos taken in rapid succession), ask for it. If they can’t provide that proof, you shouldn’t have to pay.

Also, if you receive your ticket by mail, you might notice a new charge by your rental car company around 5000 ISK ($39 USD). If a speed camera snaps a shot of you, the Icelandic police trace the car back to the proper rental car company. By law, the rental company must provide the police with your information. Some rental car companies charge a handling fee for this.

Do I Need To Pay My Ticket?

Yes, you should pay because you broke the law and it is the right things to do. But do you have to? Based on my research, it seems that if you don’t ever plan on driving in Iceland again, you don’t have to pay.

The biggest concern for those who receive tickets and don’t want to pay is if they return to Iceland in the future, would they be turned away, arrested, or stopped at customs and forced to pay a steep fine?

One individual who allegedly called the Icelandic police department spoke to a woman who said nothing would happen since they are not a citizen of Iceland.

There seems to be no evidence that unpaid speeding tickets are visible to immigration officials in any country. If both your license and passport details weren’t recorded at the time of the offense or by the rental car company, it seems unlikely that any country would link the two together.

However, police officers most likely have visibility to outstanding fines previously incurred in their country, and definitely will in their specific state/region. So if you plan to return to Iceland one day and hope to drive, you definitely should pay the fine.

The truth is, it’s common for foreign travelers not to pay the fines.

According to police in Iceland, they manage to collect only 45% of those speeding tickets. There are a couple of reasons for this low number.

Many people went to Trip Advisor and forums like Reddit for advice on whether or not they needed to pay their fines, which range anywhere between $100 USD and $1700 USD. It seems the question itself angered a few Icelandic citizens who don’t appreciate this mindset of “I don’t live there, so why should I deal with the consequences”.

They believe that if you don’t pay the fine, then don’t return. Other’s seemed more understanding and admitted that “Icelanders know where these fast-moving cameras are and slow down when they see them.” But overall, most Icelanders agreed that it was only fair those who received these speeding tickets pay the fine.

What do you think? Should people pay the speeding ticket fine no matter the cost? If you have an experience receiving a speeding ticket in Iceland or any foreign country, let me know how you handled the situation in the comments below. I would love to hear your story!