The 10 Most Insta-Worthy Sites In The Heart Of Zona Colonial, Santo Domingo

If you love colorful walls, colonial architecture, and cobblestone streets, then you must explore Zona Colonial aka the Colonial Zone or Colonial City of Santo Domingo!

Santo Domingo is know as “The City of First”.  Within the 5 square kilometers of Zona Colonial is the first hospital, university, cathedral, monastery, and even the first street of the New World! Imagine that! Walking on the first street ever build in the Americas! Because of it’s historical significance, Zona Colonial has been declared a Wold Heritage Site by UNESCO.

While Santo Domingo itself has transformed into a modern city, Zona Colonial kept its charm and has a way of taking you back to the time when the city was first settled.

While exploring this city, I found some incredible places that will bring both color and history to your Instagram feed. So grab your camera and walking shoes, and let’s discover these hidden gems that lie throughout Zona Colonial. 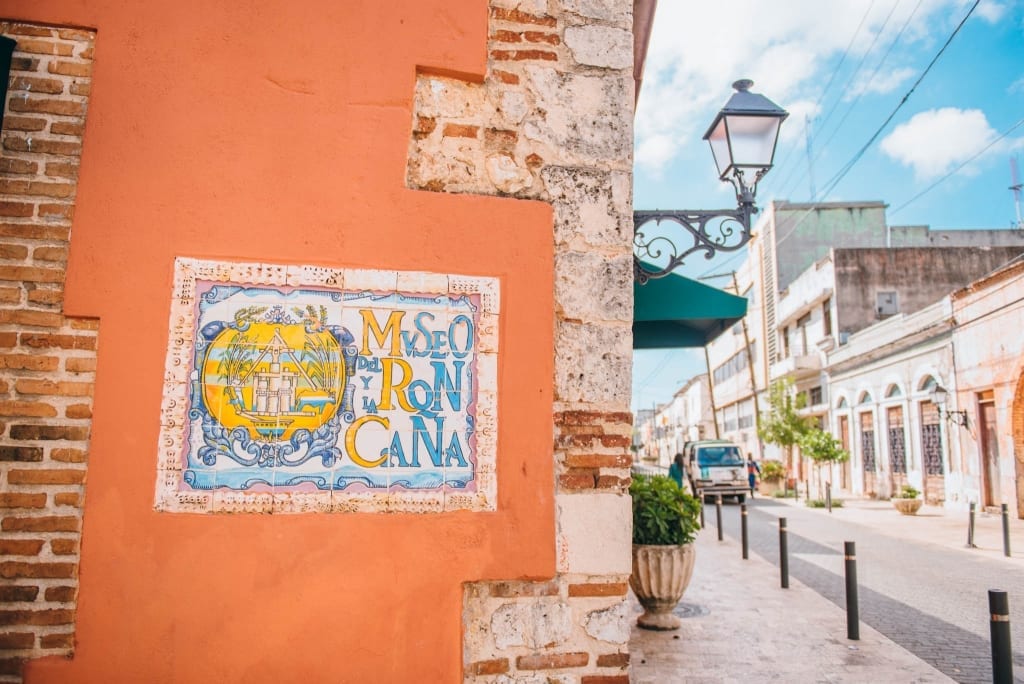 What I loved most about the convent was the mixture of architectural styles. The Baroque facade features ceramic accents and a small rose window while the ceiling’s barrel vaults reflect a more Gothic style. These two styles combined create the perfect photo backdrop and a romanticized idea about the colonial era in Santo Domingo.
Address: Calle Padre Billini, Santo Domingo 10210, Dominican Republic (Calle Padre Billini and Calle Hostos)
Dress: Love Verity 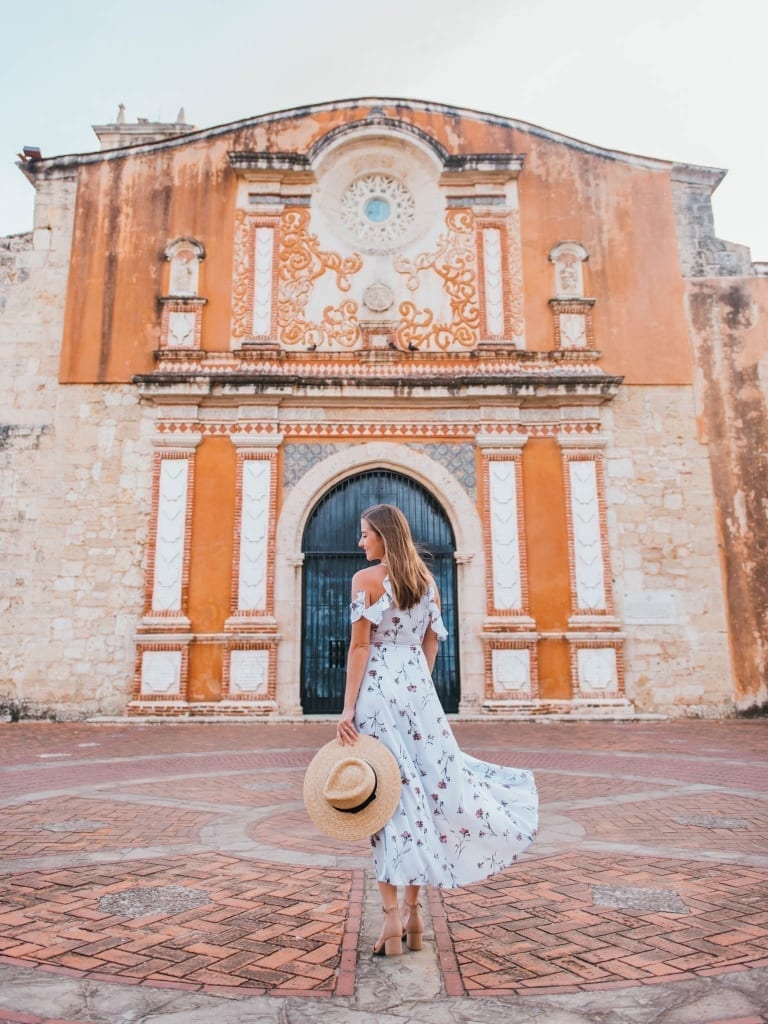 Basilica Cathedral of Santa María la Menor was the first cathedral in the New World having been completed in 1540.

The first thing you’ll notice is the limestone walls that comprise the structure. These blocks defend the building against time, weather, and human destruction while adding to the building’s dominating appearance.

What I found unique about this cathedral are the many different architectural styles throughout the building. You’ll find Gothic style vaulted ceilings, Baroque ornaments, and lavish Plateresque styles. Even though these styles are very different, together they add to the building’s originality.

Fun Fact: From the time of completion, it has been used as a church, slaughterhouse, a prison, and a wine and provision storage facility used by the pirates.

You won’t find another cathedral quite like this one so don’t miss it! 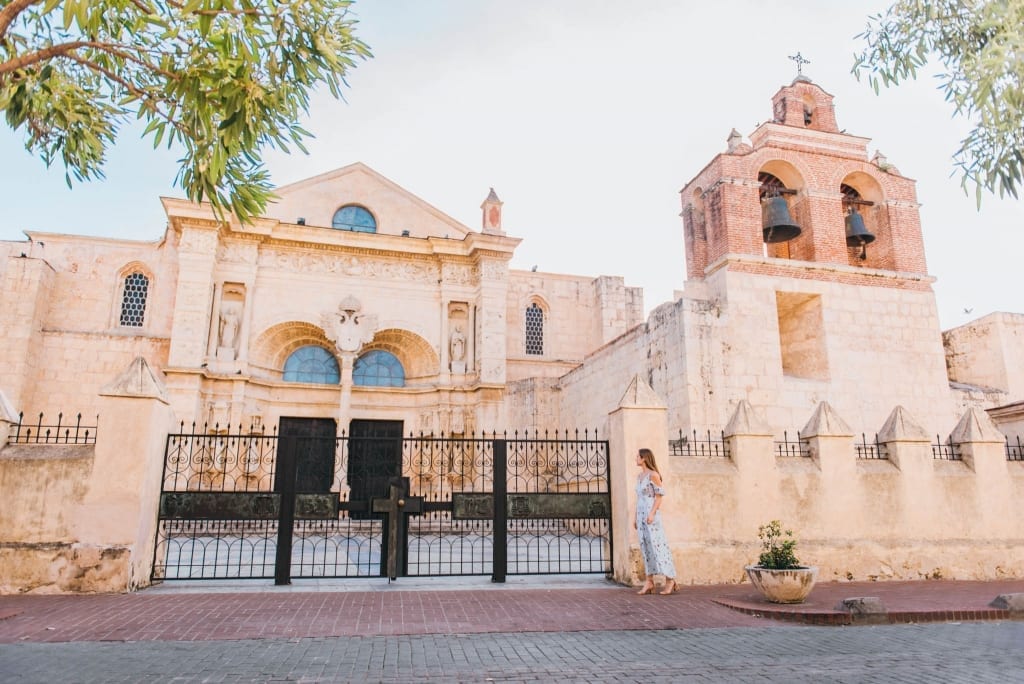 After exploring the Basilica Cathedral of Santa María la Menor, head across the street to the Palacio Consistorial. You cannot miss this building. It is distinguished by its bleach-white facade, tall bell tower, round arches, and plant-covered balconies. If you ever lose your way in Zona Colonial, just look for this clock tower and you’ll be able to figure out where you are.

Built early in the 1500’s, it was originally the location of the old town hall and now is an art and cultural center. It also serves the need of many Instagrammers trying to get that perfect shot with a colonial building. 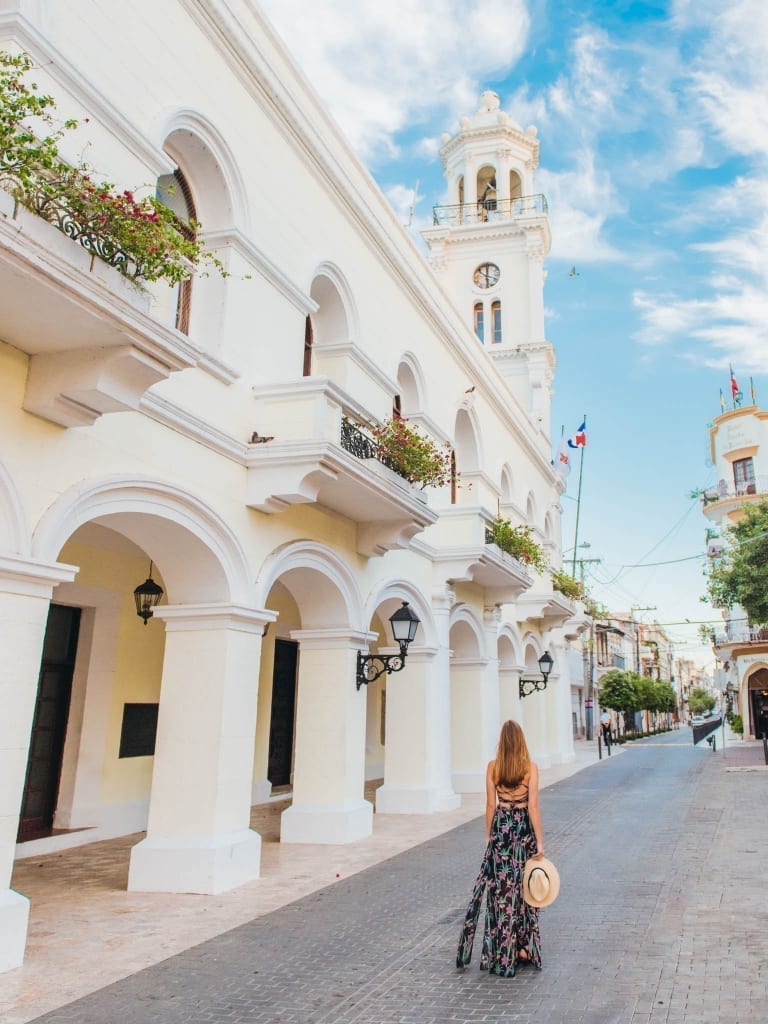 The National Pantheon is located on Calle Las Damas, the first street in the New World!

It is now a mausoleum housing the remains of historical figures and honored citizens from the Dominican Republic.

The National Pantheon is quite an impressive building and a definite must see! Be sure to go either early morning or late afternoon for the best (most even) lighting. 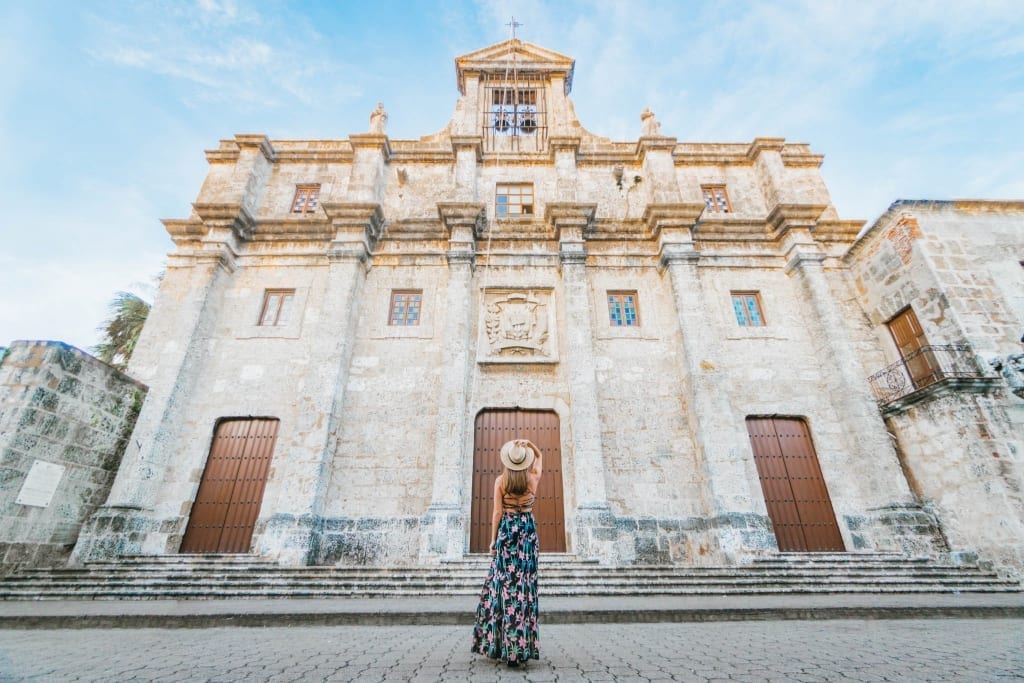 Museo de las Casas Reales or Museum of the Royal Houses can be found at the end of Calle Las Damas.

Built under the orders of King Ferdinand II of Aragon in 1511, it housed the main government offices of the Spanish colonies in the Americas. The Renaissance-style palace was comprised of two interconnected buildings. The first section housed the First Court of the New World, and the second section was used by the government officials such as viceroys, governors, captains, and generals.

Today it is a museum to highlight the history, life, and customs of the Spanish colony in the Dominican Republic. It showcases colonial-period objects, including treasures recovered from sunken Spanish galleons, impressive antique weaponry collection (such as samurai swords, medieval armor, and ivory-inlaid crossbows), and period furnishings.

What’s really incredible is that the building borders the original fortified walls of the city and the river Ozama, so you are able to experience the same view the Spanish officials and Royal Court had while living in this palace. 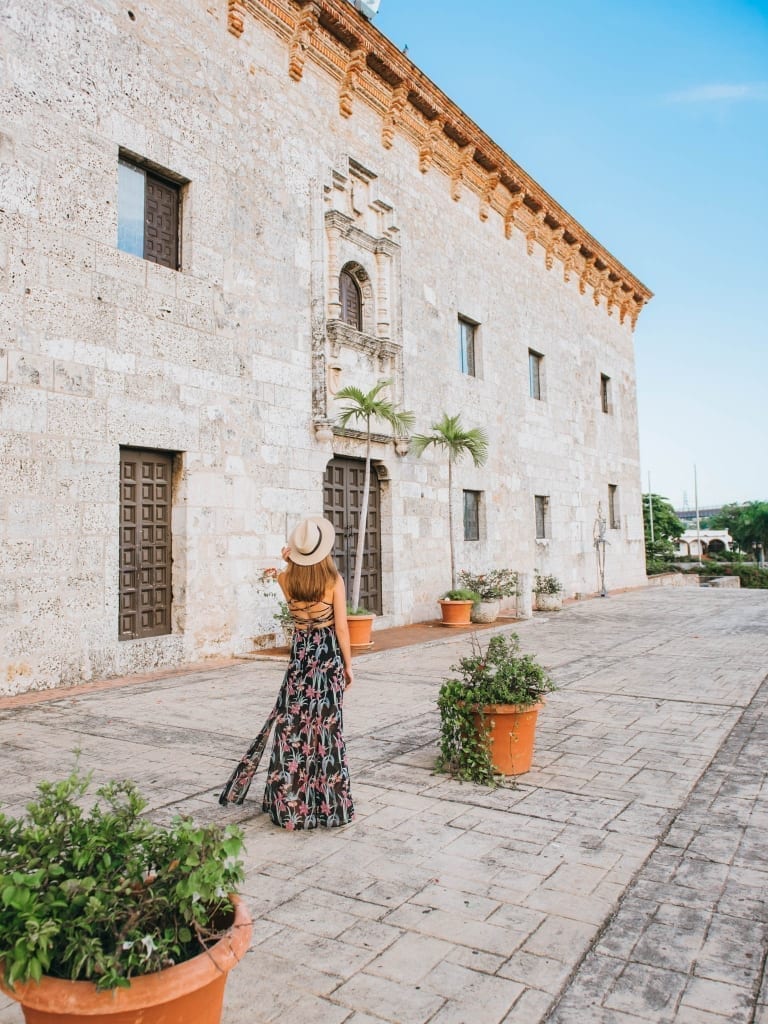 During your time in Santo Domingo, I definitely recommend staying in Zona Colonial, and I have the perfect place in mind: Hodelpa Nicolás de Ovando.

Comprised of three conjoining stone houses and courtyards built in 1502, this historical building was the first to be built on the colonial lands of Santo Domingo. It was occupied by the town’s founder, Governor Nicolás de Ovando, and his family. On the first street of the New World, 16th-century estates have been transformed into a luxe boutique hotel with 104 rooms, modern amenities, a swimming pool, restaurant, bar, gym center, complimentary WIFI, and parking.

This gorgeous hotel is the perfect place to capture the essence of colonial architecture. Make sure you check out the red brick courtyard and the stunning view of the river! 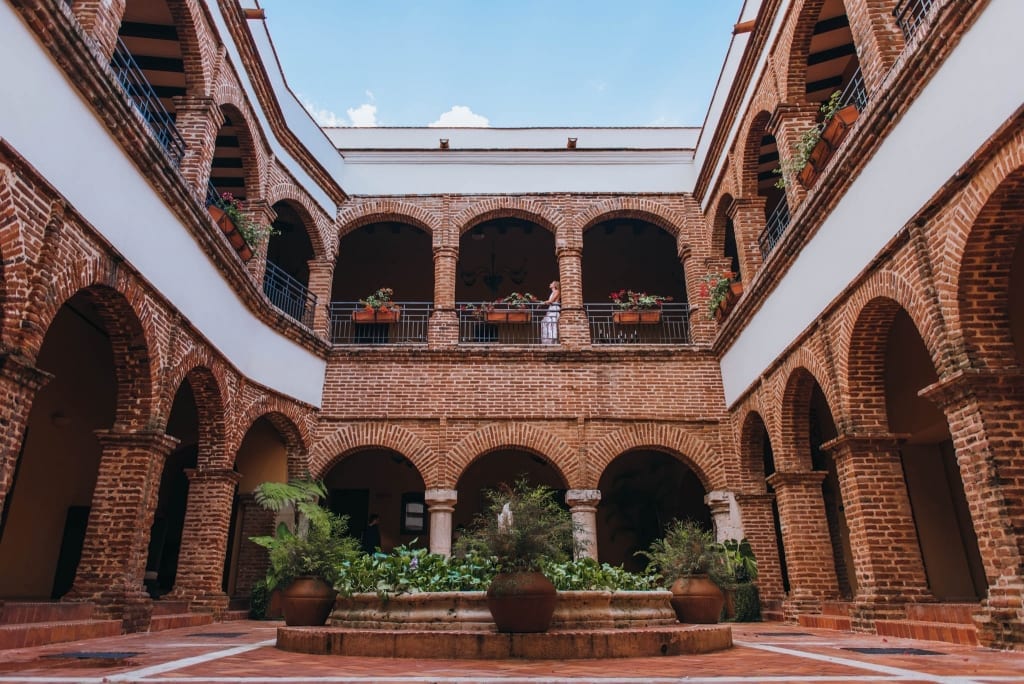 Chapel of Our Lady of Remedies

Along the first street in the New World you will come across Chapel of Our Lady of Remedies.

This small sixteenth-century Gothic church was originally a private chapel for the prominent families of Francisco Davila and Nicolas de Ovando. It features a beautiful red brick façade, blue door, a distinctive triple-arched belfry, and a barrel-vaulted ceiling.

It’s the perfect spot to catch your breath after wandering these historical streets. 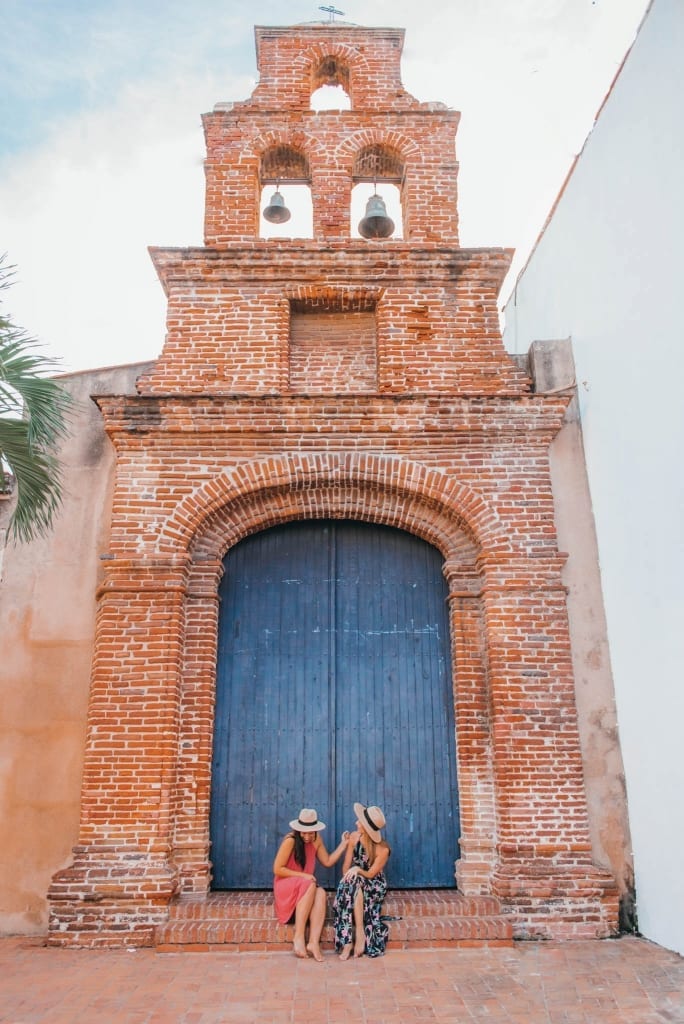 Monasterio de San Francisco was the first monastery in the New World!

Constructed in 1556 under the charge of Nicolás de Ovando, the monastery belonged to the first order of Franciscan friars who arrived to evangelize the island. The monastery was destroyed and rebuilt many times after attacks from invaders and earthquakes. By the 1880’s, it was used as a mental asylum until the 1930s when it was once again destroyed by a hurricane and never repaired. Now, the ruins are used for social and cultural events.

While we didn’t have the opportunity to walk around the ruins, exploring the exterior and looking in was absolutely incredible. 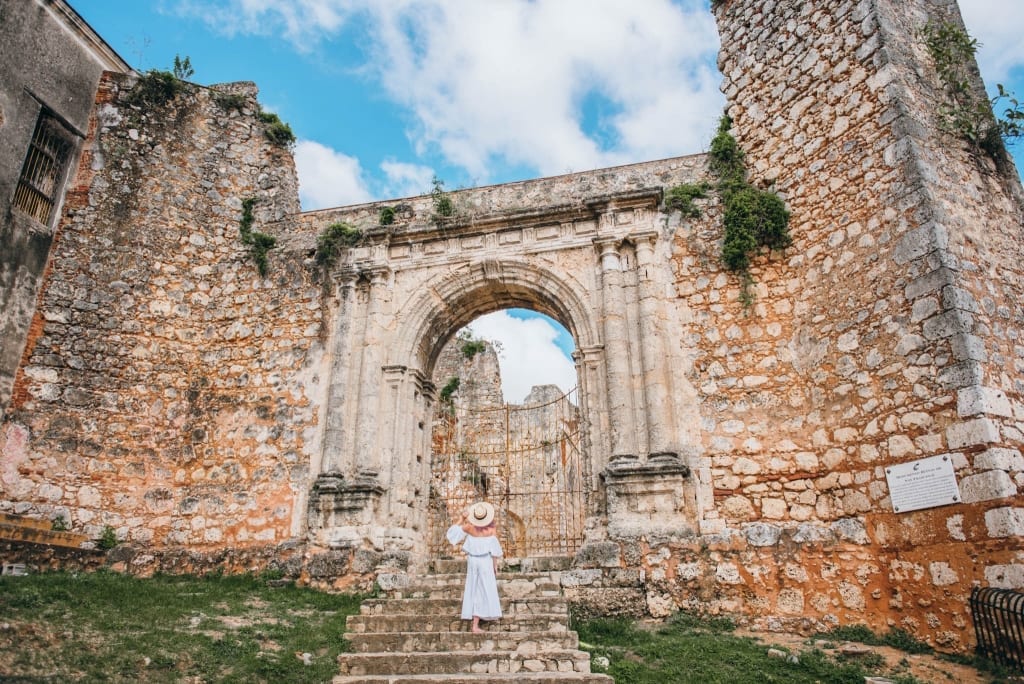 Right on the border of Zona Colonial is the most Insta-Worthy cafe/art gallery/bookstore!

With a similar style to a Moroccan riad, the entrance to Mamey Librería Café has an open aired garden courtyard with vertical gardens, planters, fountains, and beautiful blue tiles. As you move past this garden, you are drawn to a corridor featuring a contemporary art exhibit and another open-aired courtyard with a brick floor, chairs and tables, and trees. It’s like a little oasis from the hustle and bustle of the city.

Here’s your chance to grab a seat, sip on some piña coladas (one of the best I’ve ever had), order some delicious ceviches tacos, and enjoy this quiet retreat. Oh and of course take some unique photos! 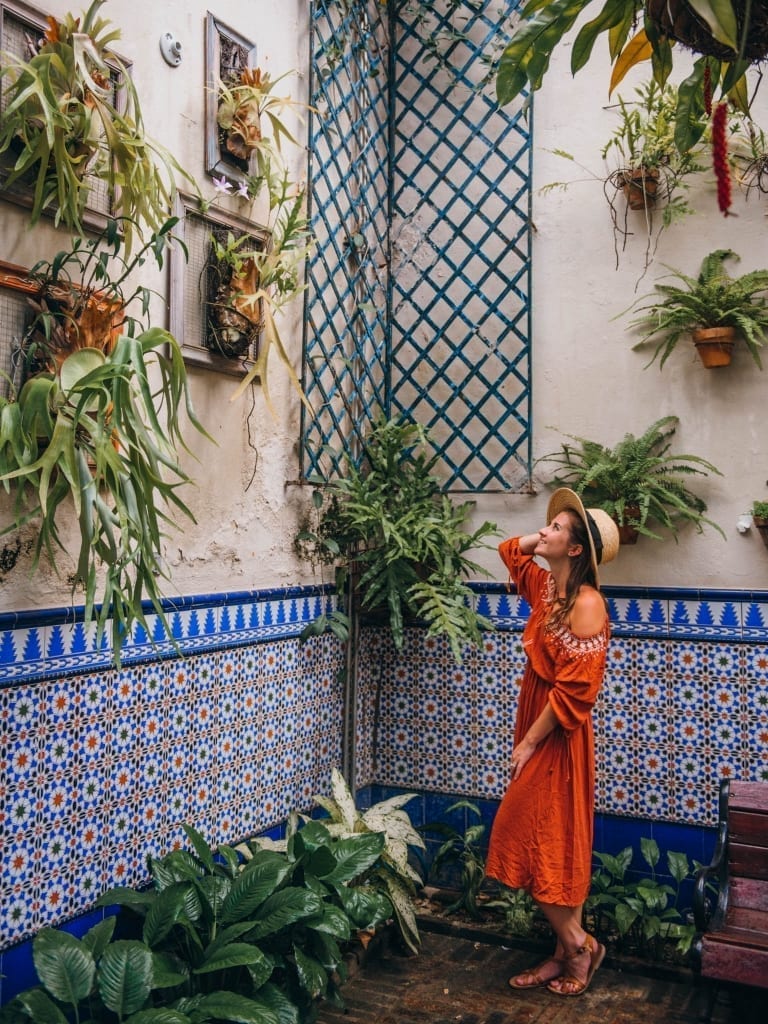 If you’re a fan of colorful walls, then all of Santo Domingo’s Zona Colonial will definitely be a favorite!

I specifically listed Calle Jose Reyes because of my favorite orange, yellow, and turquoise wall (photo below). However, every single corner in Colonial City offers colorful buildings and vibrant streets. This is why I believe walking is the best way to experience Zona Colonial. 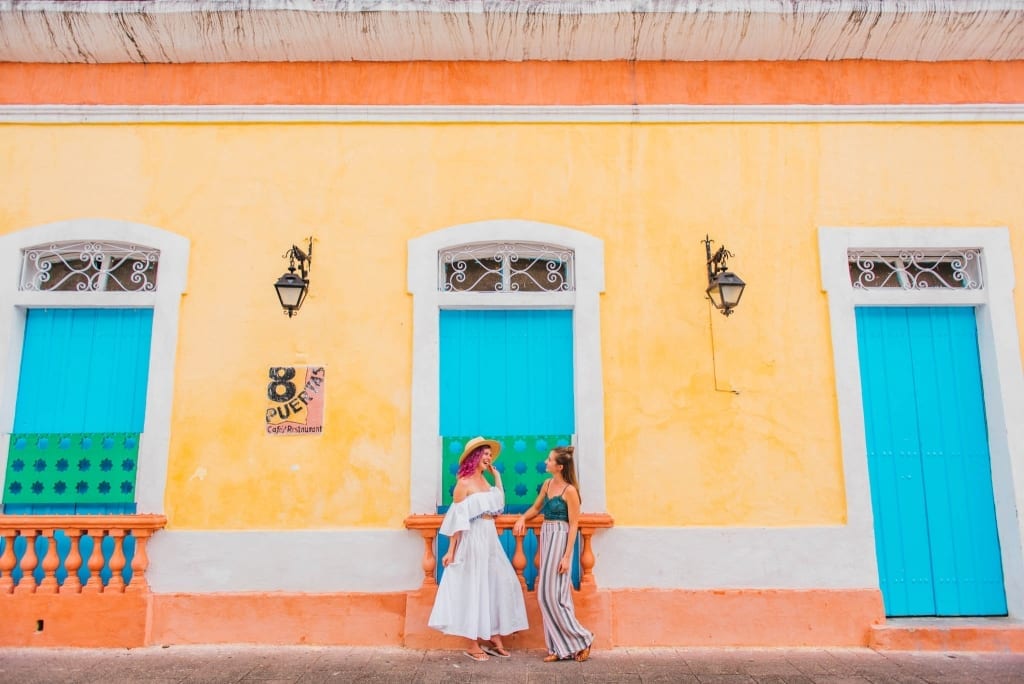 Do you love being touristy and buying souvenirs? Or perhaps you want to try some local specialties like hand rolled cigars or the alcoholic aphrodisiac, Mama Juan? If you said yes to any of these questions, be sure to check out Santo Domingo’s largest indoor market, Mercado Modelo!

Mercado Modelo is full of trinkets, precious stones (such as larimar), exotic produce, energetic salesmen, and even witch doctors! But don’t worry, while meeting a witch doctor may sound a little scary, they mainly prescribe herbal remedies for various ailments.

Just a little outside of Zona Colonial, this lively market is truly a unique experience with colors that will make any photo pop! 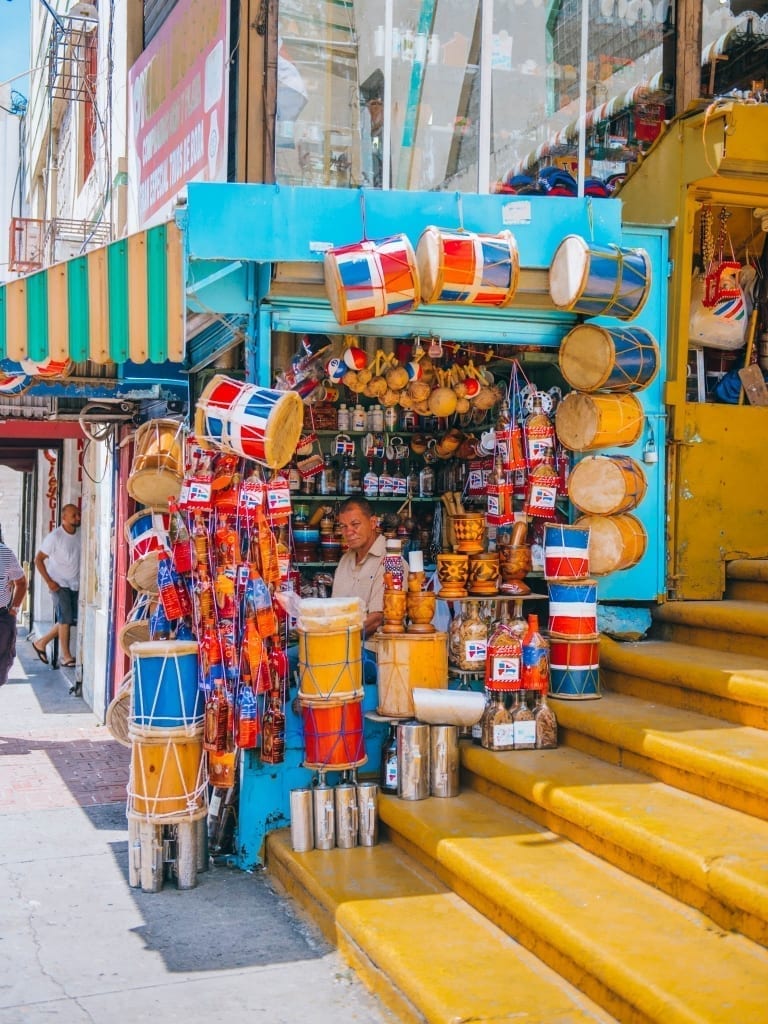 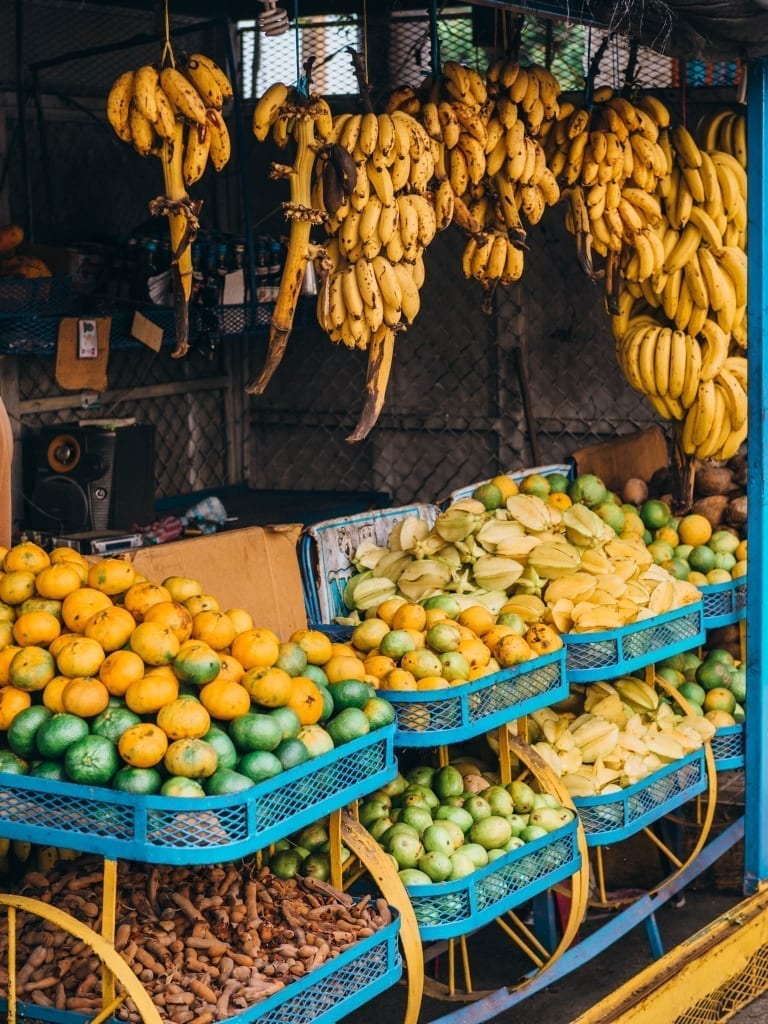 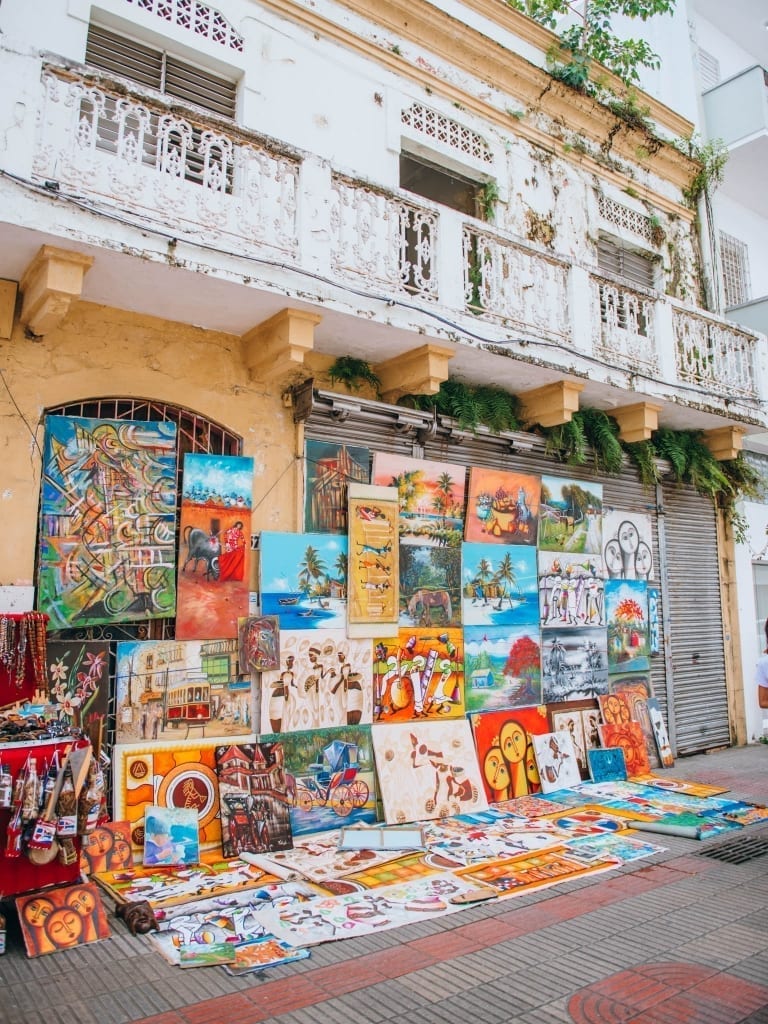 Which of these 10 Insta-Worthy places around Zona Colonial,  Santo Domingo would you love to visit? Let me know in the comments below!

Thank you so much to the Dominican Republic Ministry of Tourism for inviting me to explore your beautiful country. As always, my thoughts and opinions are my own.